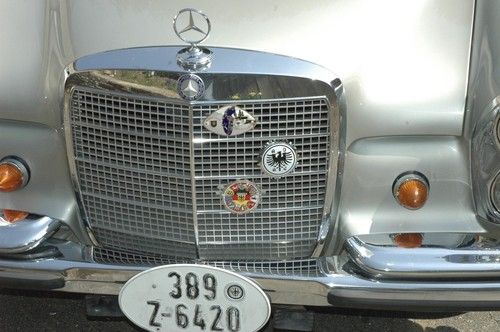 This auction is for a beautiful second owner low mileage 1969 Mercedes Benz 280SE/8, Chassis 108.019 built in Stuttgart Germany.  This vehicle was acquired in an estate sale.  This well kept vehicle was originally purchased new at Rallye Motors in Glen Cove, Ny.  The original bill of sales, provided with the vehicle, lists the following:

This is a beautiful White Gray colored car.  The car has been painted once and the original touch up paint is still with the vehicle.The Chrome is shiny and shows little pitting.  The interior shows minimal wear.  The vehicle only had 57,000 miles on it when it was purchased from the original owners estate.  The vehicle has always been garaged and nicely maintained.  There is an electric antenna which works well.  All the power windows work as does the radio.  There is scratch on the lower part of the passenger front door and a dent on the passenger front bumper.  Both are minor in nature and easily repaired.  The heater control knob handle is cracked.  These are available.  This car needs only a good detailing before being presented at a auto show.  There is a slight haze on some of the seats and other soft interior parts that wipe right off with a leather conditioner.  The underside is good and shows no signs of rust.
Please message and call me at 215-896-8104 if you have any questions.
I recommend an in person inspection to fully inspect the car as it is being sold in as is condition.