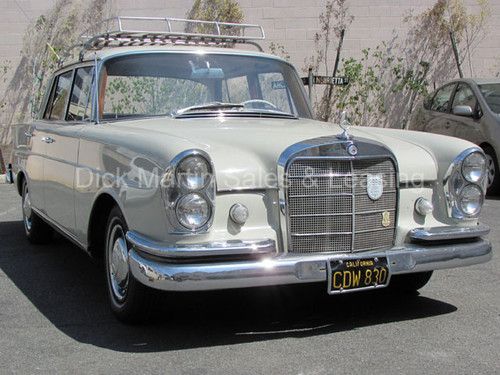 1964 Mercedes Benz 220S Sedan. One owner car. Black plate California car. Mileage stated 127805. Original color and interior from MBZ Germany. Repainted in 2005 paint looks good some cracks in sides, Engine/transmission overhauled in 2010, Tires, Brakes, Shocks, Exhaust, Interior Carpet, changed in 2010. Minor rust in trunk, and wheel wells, under carriage in good condition, Body is clean no dents, Bumpers show minor rust and dents, Driver door arm mechanism is rusted out. Leather is ok. Head liner is good with minor stains. I have any detailed pictures on my site. Mechanically car runs great. Roof rack is authentic. You won't be disappointed ! Car has been garaged for many years but driven monthly. Questions please me a call. As mentioned many detailed pictures at dmlsg.com. Ask for John 626 795-0400 ext 105 or cell on evenings and weekends 626 641-5700