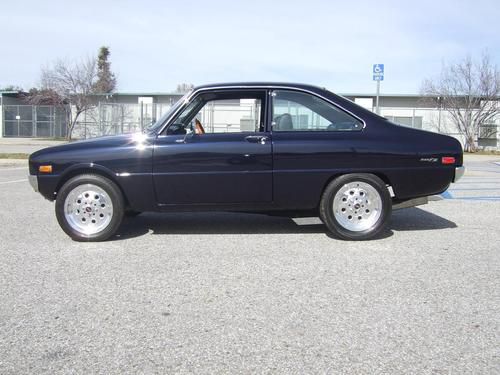 i thought i would never sell this r100 but ??? the color is a lexus blacksapphire pearl redone interior redone dash that alone was like 1k the motor is a 13bpp with 9.7 rotors rx8 shaft 62 terminator carb racing beat alum flywheel pressplate and 4 puck clutch trans is a old school cosmo 5speed motor is balanced by racing beat. header 2 magnafloww glass packs 2.25 16" long to a borla 3" muff stock rear housing with the kia 4.77 posi gears msd boxes for ignition hidden under dash no big ugly autometer gauges in this car. 3 gauges in center are smiths . lakewood traction bars weld wheels 15x3 and 15x7 the front struts are rx2 with new inserts with aerospace components brakes 2piston calipers with the stock 4x110 bolt pattern clutch/brake master cylinders are from a ford courier for better pressure than the stock r100 stuff bumpers and rear light housing recromed look like new window stainless and rain gutters are clean originals all new rubber for windows battery  in trunk inside an aluminum battery box 15 gallong aluminum cell in trunk the gass door was removed sheet metal welded in for a clean look extra parts for car are the original front struts complete rotors calipers lines etc,clutch/brake masters, extra set of window regulators, 5 speed from s4 turboll extra 13bpp spare motor 0 miles all new pcs inside motor 9.7 rotors with fd e shaft sure forgetting something else ask questions ill answer them asap car has always been a southern california car no rust issues anywhere