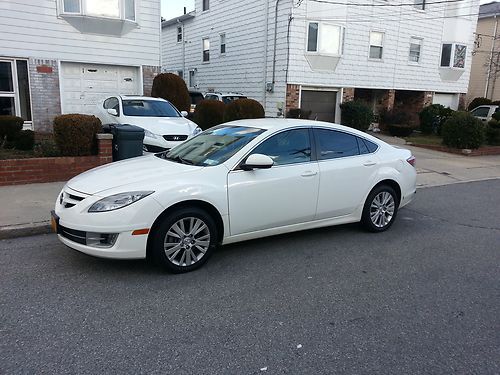 There are school projects, and then there's the Mazda Deep Orange 3 Concept Car, a one-off built by Clemson University automotive engineering students and designed by Frederick Naaman from the Art Center College of Design in Pasadena. Clemson students unveiled the chassis at the 2012 SEMA show in Las Vegas, although this is the first showing of the car fully clothed.
Sporting a unique hybrid powertrain that can automatically switch between front-, rear-, and all-wheel drive. A gas-powered engine handles the fronts, while the rears are powered by an electric motor and a battery pack. The Deep Orange 3 also has an unusual three-plus-three layout, making it a much cooler version of your parent's old Vista Cruiser. The exterior sheetmetal clearly follows Mazda's established design language, and looks like it could easily pass for a five-door version of the Shinari Concept. It really is a great looking vehicle.
The Deep Orange 3 was part of Clemson's graduate-level auto engineering program, and is a regular partnership between the east coast school and the Pasadena-based design college's students. Clemson, Art Center and Mazda will be showing the Deep Orange 3 at the Center for Automotive Research Management Briefing Seminars in Traverse City, MI, from August 5 to August 8. Click through for a press release from Clemson University.