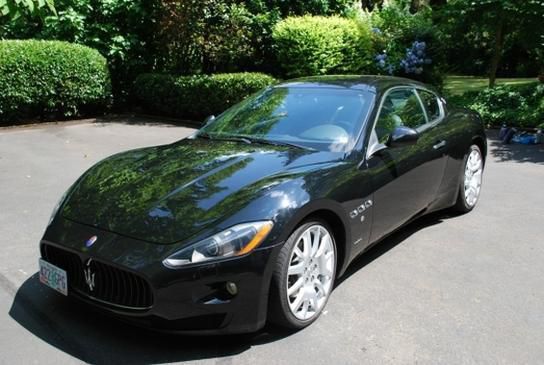 2008 Maserati Gran Turismo in like-new condition. Options include 4.2 liter V-8 405 HP engine, Navigation, Heated
Seats, Bose premium sound, Back up sensors, Voice Command, AUX input, Premium leather upholstery, Upgraded 20" bird
cage wheels, 20GB hard drive, Sport Mode.. Local car. This is a gem of Italian engineering , no need to spend
$90,000 and up on a more recent year model since this car has remained virtually identical since 2008, save and
enjoy the best for a reasonable lower price. This is a beautiful car in immaculate condition clean and clear
carfax, clean and clear title in hand.

Maserati's newest car, Ghibli, is a stunningly well-proportioned luxury sedan mixing the styling of the larger Quattroporte sedan and the GranTurismo coupe. We found it plenty good to in our First Drive review, and now we know how much it will cost (in the UK, at least).
Ghibli pricing announced at the Goodwood Festival of Speed is for customers in the UK, but based on current exchange rates and prices of other Maseratis sold here in the US, we can estimate its MSRP for our market. The base Ghibli, with a twin-turbocharged V6 making 325 horsepower, will cost 52,275 pounds for the Bits, making $75,000 a good guess for American buyers. If that number holds true, however, the Ghibli would be in a price category above its main competition from Audi, BMW and Mercedes-Benz. Take a step up to the Ghibli S, sporting a naturally aspirated V8 producing 404 hp, and you'll have to fork out 63,415 pounds or an estimated $91,000 here.
Just for kicks, the Europe-only Ghibli Diesel, which makes 270 hp and 420 pound-feet of torque with its diesel V6, is the least-expensive Maserati 48,830 pounds. Running an estimated $70k for us, we'd really like to have that one, too. After all, the sparkplug-less engine is the same one found in the Jeep Grand Cherokee EcoDiesel.