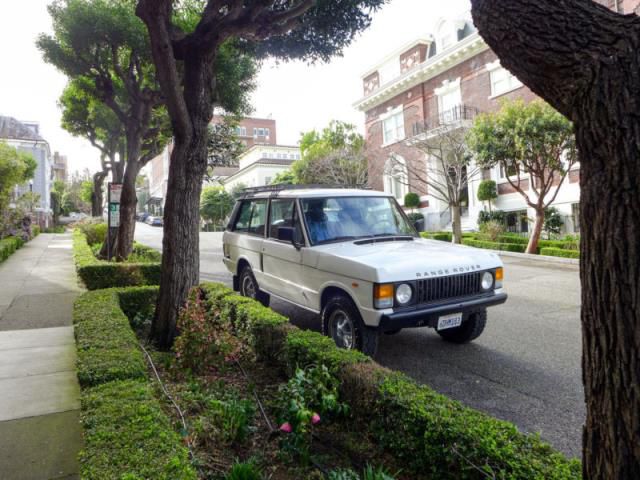 Drivetrain / powertrain from a '95 Range Rover Classic (including the automatic transmission, Borg Warner VC transfer case, Lucas 14CUX fuel injection, oil/cooler lines, hoses, and more)Exhaust system, catalytic converters, fuel tank, and necessary emissions equipmentBrake master cylinder upgraded to a new larger versionStarter motor replaced with a stronger, more robust version Full repaint in Arctic White Re-done interior in black leather (seats are leather, some other parts such as the transmission tunnel are vinyl, black carpeting)New headlinerWood trim refinished (it's beautiful)Custom transmission tunnel modified for the automatic transmission complete with fully upholstered later-style consoleAir conditioning installed from the '95 (works very well)Refurbishment of numerous cosmetic items Since I acquired the vehicle several years ago, the vehicle has been driven less than 4,000-5,000 miles, and I have had the following work done... some as necessary items, but more so that this would be a "reliable" driver (as reliable as Range Rovers can be). This Rover has truly been a labor of love for me, with no expense spared:Upgraded engine (4.6L) which lends ample but not prodigious power; 4.6 bottom end freshened when installed and converted to work with Lucas EFI and includes new Crower 50229 camshaft and lifters'95 Range Rover Classic 4.2L ECUNew vacuum advance unitNew fuel pumpNew swivel ball seals, CV joints and front/rear wheel bearingsCupholder installed in center consoleUpgraded headlight bulbs (Hella);