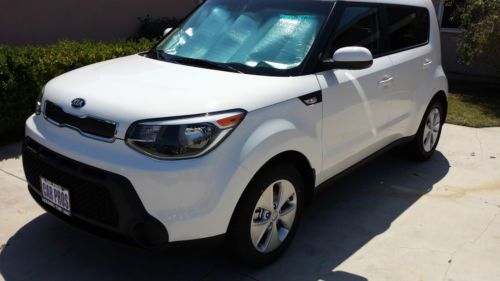 It was just two weeks ago that we saw our first glimpse of the 2015 Kia Sedona testing in full camouflage, but now Kia has stripped away some of the heavy cladding to give us an even better idea what its new minivan will look like. As we pointed out before, the next Sedona doesn't use as many design cues from the 2012 Kia KV7 as we initially hoped, but it should be interesting enough to stand out from the current crop of minivans.
Even though most of the body is still covered with the black and white pattern and the side doors still have cladding, these spy shots show off plenty of details about the new Sedona. Starting up front, Kia gave its minivan a more upright shape that we've seen a lot of on current Kia designs, while the reduced camo also makes the van's new side window shape more obvious. This pinched daylight opening (DLO) along the side is the same as what we saw on the KV7, and the window line dips back down again for the liftgate glass. While we're focused on the rear of the Sedona, that liftgate spoiler looks a lot like what we're used to seeing on the back of a Porsche Cayenne.
Kia has still yet to announce when its new minivan will be unveiled, but as things seem to be pretty far along in development, we'd expect to see something on the 2015 Sedona fairly soon.

2014 Kia Sedona rises from the dead, same as it ever was

Don't throw away your car seats just yet, Korean minivan enthusiasts - the Kia Sedona is back on the market. If you recall, Kia killed its minivan offering at the end of 2012 (there was never a 2013 model). But here's what's making us scratch our heads: Despite the fact that Kia did confirm that the Sedona would eventually be back, we were under the impression that it would return with a proper replacement for the aging van. (Earlier reports suggested something along the lines of that cool KV7 concept.) Instead, the reincarnated Korean minivan you see here is, well, the same as it ever was. Consider our buzz killed.
That's not to say there haven't been a couple of delightfully refreshed bits thrown into the new package. For starters, the Sedona wears a slightly updated schnoz with a redesigned grille, LED positioning lamps and standard foglamps inside the reworked lower fascia. (If we're honest, the Kia looks a bit Ford Windstar-ish from the front three-quarter angle.) There's a new 17-inch wheel design for the 2014 model year, and aside from a couple enhancements to the interior in terms of storage, that short list rounds out the full extent of the new updates.
All Sedonas are powered by the same 3.5-liter V6 that debuted in the 2011 model, producing 269 horsepower and 246 pound-feet of torque, mated exclusively to a six-speed automatic transmission. Fuel economy ratings fall in at a rather mediocre 17/24 miles per gallon (city/highway).