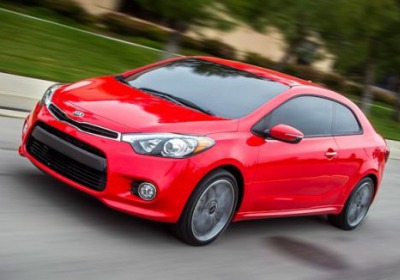 Third time's the charm. The final member of Kia's Forte trio has been revealed here at the New York Auto Show, and this new coupe Koup will join the sedan and five-door models when it goes on sale near the end of this year.

The two-door Forte looks sharp, and we like the way Kia's new design language for its compact car has translated onto this coupe model. LED running lights are found up front, matching the LED taillmaps at the rear. EX models will ride on 16-inch alloy wheels, while the upgraded SX model will use 18-inch rollers.

Two powertrains will be offered in the Forte Koup: a 2.0-liter naturally aspirated inline-four in the EX, producing 173 horsepower and 154 pound-feet of torque, mated exclusively to a six-speed automatic transmission; and a turbocharged 1.6-liter four in the SX, rated at 201 horsepower and 195 pound-feet of torque, available with either a six-speed manual or automatic transmission. The five-door Forte also gets this turbocharged mill, and if its specs sound familiar, it's because this engine is also found under the hood of the Hyundai Veloster Turbo.

Inside, Kia says there are plenty of sporty touches to the cabin, though all that really means for buyers is a smattering of fake carbon fiber and some leather-wrapped touchable surfaces. Still, things should be pretty pleasant inside the Forte, and Kia promises standard features like the company's UVO connectivity system, Bluetooth, Sirius satellite radio and a rear camera display.

Pricing will be announced closer to the 2014 Forte Koup's on-sale date later this year. We'll have more images direct from New York in short order, so stay tuned. In the meantime, take a glance below for the official press release.

- Lower, longer and wider, the all-new Forte Koup exemplifies World-class style and sportiness
- Forte Koup is expected to go on sale in the fourth quarter of 2013

NEW YORK, March 27, 2013 – Kia Motors America (KMA) today announced the third and final member of the completely redesigned Forte lineup when it unveiled the sleek and purposeful all-new Forte Koup at the 2013 New York Auto Show. Following the launch of the Forte sedan and Forte 5-door, the all-new two-door Forte Koup SX boasts European-inspired design and performance to match with a 1.6-liter gasoline direct-injected (GDI) turbocharged four-cylinder engine putting out 201 horsepower and 195 lb.-ft. of torque. As equipped, the SX is the most powerful Forte Koup ever. Sales are expected to begin in the fourth quarter of 2013, and pricing will be announced closer to the Koup's launch.

"The Forte Koup is arguably the sportiest vehicle in our award-winning lineup, and it has helped raise Kia's brand awareness significantly among automotive enthusiasts," said Michael Sprague, executive vice president of marketing & communications, KMA. "Its rakish design, premium amenities and powerful turbocharged engine set it apart from the competition. With the debut of the Forte sedan and 5-door earlier this year, and now the Koup in New York, the Forte lineup has been completely revamped from top to bottom."

Similar to its Forte 5-door sibling, the Forte Koup is offered in two trim levels, EX and SX, with two engine and transmission choices. The EX comes equipped with a 2.0-liter GDI four-cylinder engine, and the tarmac-carving SX comes standard with the 1.6-liter turbocharged four-cylinder. The EX comes standard with a 6-speed automatic transmission while the SX may be mated with either a standard 6-speed manual or optional 6-speed automatic featuring steering-wheel-mounted paddle shifters.

Created by the design studio at KMA's corporate campus in Irvine, Calif., the Forte Koup's sporty two-door profile, swooping roofline, and large 18-inch alloy wheels give it an athletic and aggressive stance that continues Kia's tradition as a design leader.

The interior of the Forte Koup features premium materials and soft touch points. Large, easy-to-read white-on-black gauges nestle deeply into the instrument cluster. Chrome accents around the HVAC controls and optional push-button start, along with carbon fiber-like textures on the dash and seats, add a sporty touch. A grippy leather-wrapped steering wheel and shift knob are further evidence of the Forte Koup's performance intentions. Class-exclusive available features such as front heated seats, an air-cooled driver's seat and driver-selectable electric steering further set the Forte Koup apart from its two-door competition.

Utilizing a 1.6-liter GDI turbocharged four-cylinder engine, the SX is the most powerful Forte Koup ever. Power is seamlessly transferred to the front wheels via a six-speed manual or automatic transmission. The GDI powerplant produces 201 horsepower at 6,000 rpm and 195 lb.-ft. of torque between 1,750-4,500 rpm. The advanced powertrain features double overhead cams with dual continuously variable valve timing to help improve efficiency and performance.
The Forte Koup EX comes standard with a 2.0-liter GDI powerplant producing 173 horsepower at 6,500 rpm and 154 lb.-ft. of torque at 4,700 rpm. During durability testing, the engines are run 300 continuous hours at redline under full load then for an additional 20 hours at 10 percent above redline under full load.

To help further improve performance, the Forte Koup features a sport-tuned suspension with a McPherson strut setup in front and a torsion beam rear design. The Koup rides on standard 205/55R-16 tires while 225/40R-18 tires are included with the SX trim for an even more sporting driving experience.