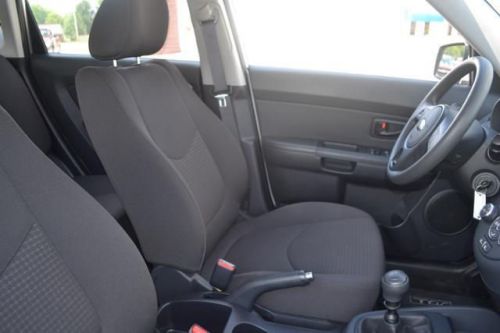 JUST REPRICED FROM $13,695, PRICED TO MOVE $2,000 below NADA Retail!, EPA 30 MPG Hwy/25 MPG City! Spotless, GREAT MILES 10,605! Base trim. Bluetooth, CD Player, iPod/MP3 Input, Head Airbag, Satellite Radio. AND MORE!======KEY FEATURES INCLUDE: Satellite Radio, iPod/MP3 Input, Bluetooth, CD Player. MP3 Player, Child Safety Locks, Steering Wheel Controls, Electronic Stability Control, Bucket Seats. Base with Bright Silver Metallic exterior and Black seat trim interior features a 4 Cylinder Engine with 138 HP at 6300 RPM*. Serviced here, Non-Smoker vehicle. ======AFFORDABLE TO OWN: Reduced from $13, 695. This Soul is priced $2, 000 below NADA Retail. ======WHY BUY FROM US: Introducing SVG Motors where Superior Value is Guaranteed! We are your premier full service used car dealer located in Vandalia, Ohio. Our commitment to excellence and customer service is second to none. We take pride in acquiring only top quality used cars, minivans, trucks and SUV's. At SVG Motors we showcase a wide variety of vehicles to suit your everyday needs. Our impressive selection is meticulously cleaned and inspected. We offer affordable extended service contracts & warranties. Pricing analysis performed on 6/18/2014. Horsepower calculations based on trim engine configuration. Fuel economy calculations based on original manufacturer data for trim engine configuration. Please confirm the accuracy of the included equipment by calling us prior to purchase. PURCHASE FROM SVG MOTORS AND GET 3 YEARS OF OIL CHANGES AT NO COST TO MAINTAIN YOUR NEW VEHICLE!!! CALL 877-824-7929 FOR DETAILS. SHOP OUR ENTIRE INVENTORY AT SVGMOTORS.COM