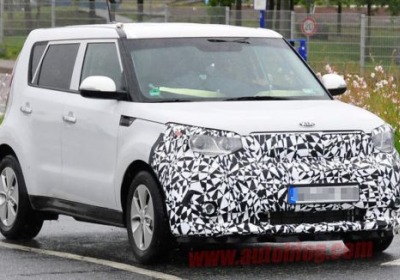 Kia has been toying with the notion of an electric vehicle for years now. In the two years since the Korean automaker revealed the Ray EV concept, rumors of a battery-powered production vehicle have persisted, evidenced most recently by spy shots showing an electric version of the Soul hatchback this past July. Now Kia has officially announced that the Soul EV is heading for production.

Although Kia has yet to reveal official photos or specifications, this is the first confirmation we've received that the Soul EV is indeed headed for a showroom near you. Set to arrive sometime next year, the Soul EV promises to pack an as-yet unspecified arrangement of electric motors and batteries and visual cues that aim to improve the vehicle's aerodynamics and differentiate it from the conventionally powered Soul.

We'll have to wait until its debut approaches at an undetermined upcoming auto show in the US for more details, but for now you can delve into the official announcement below and scope out those same spy shots in the gallery above.

- Kia's first EV in the U.S. will combine the Soul's funky and iconic design with new styling cues aimed at improving aerodynamics and distinguishing it from non-EV Souls
- Soul EV will be powered exclusively by a battery for gas-free driving and zero emissions
- Images of the Soul EV will be release closer to launch

Minneapolis, Oct. 1, 2013 – At the media launch of the all-new 2014 Soul, Kia Motors America (KMA) today announced plans to offer an all-electric version of the company's iconic Soul urban passenger vehicle in select markets in 2014. Already one of KMA's best-selling vehicles, an all-electric variant is a natural extension of the Soul's urban-friendly place in the brand's lineup of award-winning vehicles. More details about the Soul EV's powertrain, range/MPGe, packaging and go-to-market strategy will be announced at an upcoming major U.S. auto show.

"Eco-consciousness already comes standard on the all-new Soul with 85-percent of its materials able to be recycled at the end of its lifespan, and the Soul EV will further demonstrate Kia's engineering capabilities as well as our commitment to producing vehicles with reduced environmental footprints," said Orth Hedrick, executive director of product planning, KMA. "The Soul has always been a terrific choice for drivers in urban environments, and the all-new version's blend of technology, refinement, style, improved dynamics and value has allowed us to create a car that is as efficient as it is fun to drive."

Kia Motors was recently ranked by Interbrand as one of the "50 Best Global Green Brands," and Soul EV will be the second alternative-fuel Kia vehicle to be offered for sale in the U.S. The award-winning Optima Hybrid was introduced in 2011 and for 2013 sees a number of enhancements including numerous powertrain refinements for smoothness and drivability, including a more robust 47 HP electric traction motor, a stronger Hybrid Starter Generator (HSG) and a more powerful 47 kW Lithium Polymer battery.

Kia: One of the World's Fastest Moving Global Automotive Brands
Kia Motors America is one of only three auto brands to increase U.S. sales in each of the past four years, and in 2012 the company surpassed the 500,000 unit mark for the first time. With a full line of fun-to-drive cars and CUVs, Kia is advancing value to new levels of sophistication by combining European-influenced styling – under the guidance of chief design officer Peter Schreyer – with cutting-edge technologies, premium amenities, affordable pricing and the lowest cost of ownership in the industry. Kia recently moved up in the exclusive ranking of Interbrand's "Top 100 Best Global Brands" after joining the list for the first time last year, and the company is poised to continue its momentum with seven all-new or significantly redesigned vehicles scheduled to arrive in showrooms in 2013. Over the past decade Kia Motors has invested more than $1.4 billion in the U.S., including the company's first U.S. assembly plant in West Point, Georgia – Kia Motors Manufacturing Georgia – which is responsible for the creation of more than 14,000 plant and supplier jobs. The success of the U.S.-built* Optima and Sorento in two of the industry's largest segments has fueled Kia's rapid growth and is complemented by Kia's comprehensive lineup which includes the Cadenza flagship sedan, Soul urban passenger vehicle, Sportage compact CUV, Optima Hybrid, the Forte sedan, Forte5, and Forte Koup compacts, Rio and Rio 5-door sub-compacts and the Sedona minivan.

Information about Kia Motors America and its full vehicle line-up is available at its website – www.kia.com. For media information, including photography, visit www.kiamedia.com. To receive custom email notifications for press releases the moment they are published, subscribe at http://www.kiamedia.com/us/en/newsalert.

* The Sorento and Optima GDI (EX Trims and certain LX Trims only) and GDI Turbo are built in the United States from U.S. and globally sourced parts.