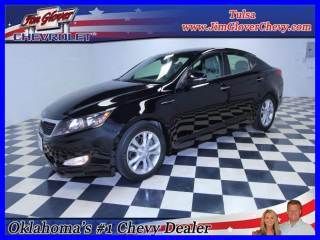 With all the excitement at the Kia stand surrounding the new Soul EV, it's easy to forget that there were other cars on display at the Korean marque's Chicago Auto Show display. The Niro Concept from the Frankfurt Motor Show made an appearance, but the other production model on display was the refreshed Optima Hybrid (which was tucked away in a corner).
Like the standard Optima, which was refreshed at the 2013 New York Auto Show last year, the hybridized sedan gets a slightly restyled face and rear end. As we told you in our official post on the car yesterday, the gas-electric powertrain of the 2014 Optima Hybrid still deploys 199 total system horsepower and 235 pound-feet of torque. Buyers of the base LX car will net 36 miles per gallon in the city and 40 on the highway, while the upmarket EX loses a mile per gallon in both environments.
Have a look at our live gallery of the new Optima Hybrid, from the floor of the Chicago Auto Show.

Kia is out to answer life's big questions in its ad for the upcoming Super Bowl. Questions like: Where do babies come from? The spot follows one father as he spins a tale to shield his young son from the world of adult truths. The story starts on planet Babylandia, where infants of every species live in peaceful coexistence until they're called to Earth. When that happens, the adorable little beings suit up and take a nine-month journey through space to their new home before parachuting from the heavens. Sure beats that tired old stork yarn.
Oh, and we forgot to mention there's a 2014 Kia Sorento in the spot as well. You can check out the whole shindig below for a quick chuckle. Expect to see the spot air during the fourth quarter of the Super Bowl, and keep your eyes peeled for the new Forte spot. We hear tell that ad features Alyssa Campanella in a robot get up. No, we don't get it either.