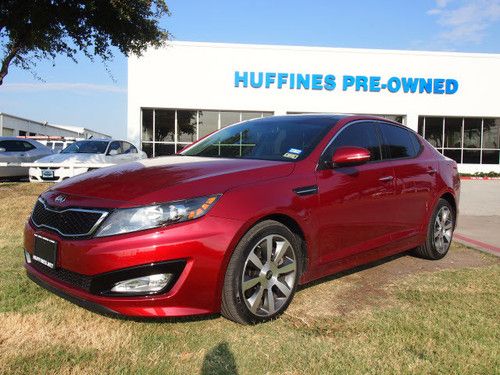 The third-generation Sportage has been around for a few years now, but Kia is making some minor changes to its compact crossover for 2014. As expected with a small, mid-cycle refresh, there isn't anything too major to report here, but the important news for the 2014 Sportage involves what's behind that modestly updated fascia.
Kia has revamped the Sportage's base 2.4-liter inline four-cylinder engine to add direct injection, which is said to improve efficiency, although no fuel economy numbers have been released yet. Switching to DI has also increased the engine's output, up slightly from 176 horsepower and 168 pound-feet of torque in 2013 to 182 hp and 178 lb-ft for 2014. Additionally, LX models now receive the sportier shock setup previously available only on EX and SX trims.
More importantly, the base trim level has been dropped from the 2014 Sportage lineup, meaning the car's manual transmission has been axed, as well. Pricing hasn't been released yet, but the 2013 Sportage already undercut competitors like the Chevy Equinox and Toyota RAV4 by thousands of dollars, so even a modest increase for 2014 would still position the Kia rather nicely in the segment.

Kia is recalling certain 2014 models of its adorable Soul due to a bad adhesive used in the steering system. According to the bulletin from the National Highway Traffic Safety Administration, the "thread-locking adhesive" that attaches the plug between the pinion gear and steering gear assembly could come loose.
Should that happen, the condition could lead to a "loss of steering," which, of course increases the likelihood of a crash. The 51,641 affected cars were built between July 21, 2013 and January 17, 2014. There have been no reported accidents, let alone injuries or deaths due to this issue.
Kia is in the process of notifying owners of the affected vehicles as well as dealers in possession of the faulty Souls.

Even with the arrival of the new Hyundai Genesis Sedan (above) and the expected introduction of at least two other new vehicles in 2014, Hyundai-Kia is estimating its sales will only increase by about 4.1 percent this year. Bloomberg has found that figure, which works out to a total of 7.86 million vehicles worldwide, to be lower than average analyst estimates of eight million vehicles. If the automaker is correct, that figure will represent the most sluggish growth for the Korean brands since 2006.
Based on an exchange rate of 1,050 won to the dollar - right now it's trading at anywhere from 1,050 to 1,052 depending on where you look - Hyundai is predicting a 3.8-percent uptick for sales of 4.9 million units, while Kia is expecting a 4.7-percent uptick for sales of 2.96 million units. That exchange rate is predicted to be part of what will hamper sales this year, with a stronger South Korean won making Japanese cars more price-competitive when cross-shopped. It's unclear how Hyundai derived its exchange rate, but 1,050 won to the dollar almost matches the 52-week high for all of 2013.
The company chairman mentioned a "low growth era" in the world economy, and weaker US sales are rumored to at least part of the reason John Krafcik recently vacated the post of Hyundai Motor America CEO, a post that has been filled by executive vice president of sales, David Zuchowski. That unexpected news capped a year in which two top execs resigned over quality issues and recalls and Hyundai agreed to settle a consolidated lawsuit over inflated fuel economy ratings for $395 million.