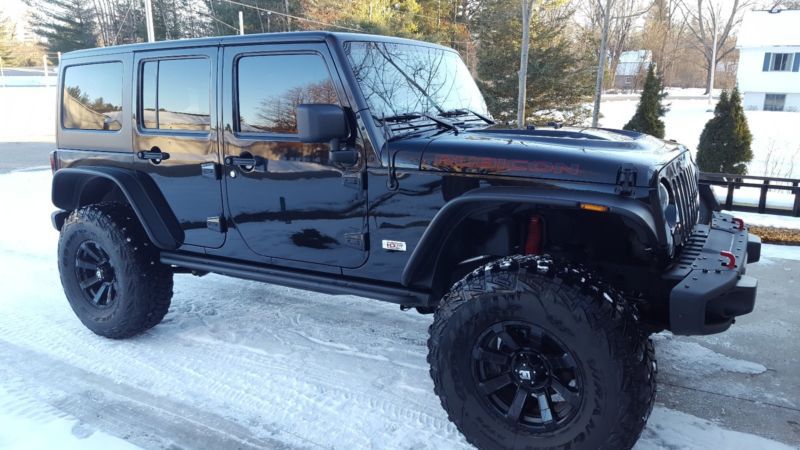 For more pictures email at: deadradsspath@elvisfans.com .

Year: 2013
Model: Wrangler Unlimited Rubicon (10th Anniversary Edition)
Color: Black Exterior with factory Red Leather Interior
Engine: 3.6L Pentastar V6
Transmission: Auto
Miles : 36.5k (may go up slightly)
Condition:
Interior 9.5/10
Exterior: 9.5/10
Options: Loaded: Navigation (430N), Front & Rear Electronic Lockers, Electronic Sway Bar Disconnect, Red Leather
Interior (10A Exclusive), Alpine Audio, Auto Trans, Auto Climate Control, Heated Seats, Bluetooth Audio, Remote
Start. The 10A is identical to the Hard Rock and Rubicon X. Anybody can go out and buy a Hard Rock, the 10A is
truly unique. I've see one other 10th Anniversary in the two years I've owned the Jeep.
Modifications: (All told the receipts are greater than $10,000)
3.5" Rancho Suspension Lift
Teraflex HD Hinged Carrier & Adjustable Spare Tire Mounting Bracket
Rancho RS9000XL Shocks
Adams 1310 Front Driveshaft
37x12.5x17 Goodyear Wrangler MT/R (Kevlar)
Teraflex Rear Bumpstop Extensions
Bushwacker Flat Style Fenders
Superchips Performance 87 Octane Tune via Superchips Flashpaq
BDS Lower Adjustable Control Arms (Rear)
Fox Suspension Performance Series Steering Stabilizer
Dick Cepek Matrix Wheels (17")
Daystar Pole Hood Latch Straps
Jeep Branded Door Sill Plates
Bestop Safari Soft Top and Rear Cargo Cover (See photos)
13" Shorty - Antenna X
2015 JK (Clear) Turn Signal Lens
Windows Tinted to 20%
I purchased this Jeep in February of 2015 from Wisconsin and drove it home to Michigan. The JK had 6,993 miles on
it when I purchased it from the dealership. The original owners bought the JK for his wife and they simply didn't
drive it often enough to justify keeping it. It was stored in a heated garage for the entire time they owned it.
I had all of the modification completed when the Jeep had ~14k miles on it. I am only selling the Jeep as I have
found a new toy and don't have the space to store the Wrangler. I've only taken the Jeep to Silver Lake Sand Dunes
one time and I just putzed around. The Jeep is in great condition and has never been through an automatic car wash;
it's hand washed at home with the two bucket wash method and stored in our heated garage when not in use. We don't
have kids and the back seats have never been sat in. The 10A is a rare trim level and per FCA (documentation on
hand) there were only 157 JK Wranglers with the same build sheet as this.
I have additional photos on hand. The under body & frame is great overall condition and I'd be happy to provide the
photos for an interested party.
Note: The photos in the winter we taken on 2/3/2017. I included summer photos so you could see what it looks like
with the soft top on.