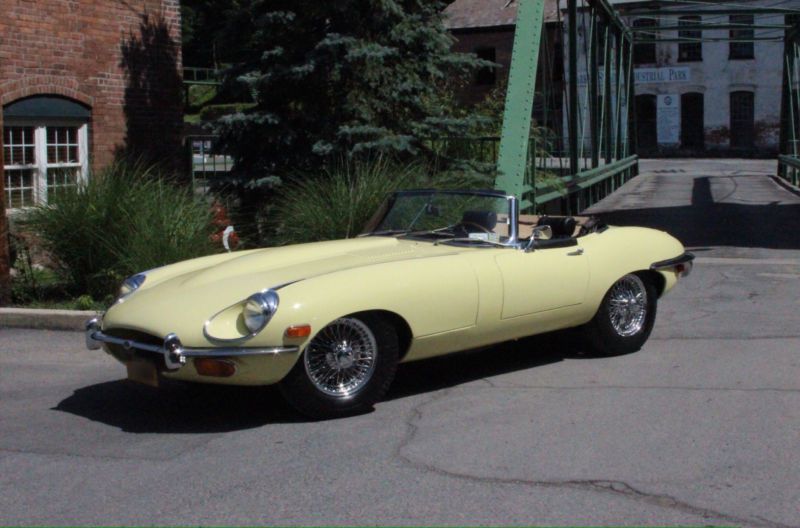 If you have any questions or would like to view the car in person please email me at: baobaaustino@artsociety.net . Up for sale is this beautiful, one owner, 1969 Jaguar XKE 4.2 roadster. I am not a dealer, I am a family friend
of the original owner and I'm assisting her in selling her beloved Jaguar. The car was purchased new from
Harrington Motors in Montgomery New York in 1969. It has always been garaged and for the most part is all original.
It currently has 45,xxx original miles on it's all original, numbers matching drive train. The interior is all
original from its black leather seats to it's mahogany steering wheel to its original Jaguar rubber floor mats.
Some scuffs on the leather seats are present, the pad on the center console is a little worn and the clock in the
dash does not work, the rear view mirror is cracked. The wood on the steering wheel is cracked but could be easily
repaired.
The exterior of the car is in excellent condition for an original, forty-six year old car. The car was
repainted in the 1970's due to a fender bender type accident but the Primrose Yellow paint has held up very well.
It does have some small dings, chips and scuffs as you would expect of a forty year old paint job. One of the
issues with the paint is that some of the trim pieces have traces of the repaint on them. The convertible top is in
excellent condition. The original chrome wire wheels are in great shape with little rust and just a trace of
peeling. The chrome trim is in nice shape.
The original engine runs great. It did have some work done last winter by Klaus Garage in Hopewell Junction New
York (see pics for repair invoice). The carburetors were rebuilt, the gas tank was replaced, clutch slave cylinder,
new battery, brake fluid reservoir, brake master and servo unit, fuel pump, basic tune-up etc work along with a
passed New York State inspection. The car runs great, This past May, the car was driven fifty plus miles from my
house in Hopewell Junction NY to the Royals Car Show at Lime Rock Racetrack in CT without a problem.

Someone filed a patent application in China for the Jaguar XJ limousine seen above, but no one's sure who filed it or what the car is for. One camp thinks it's a State limo for UK royals like the Bentley State Limousine, another camp thinks it's the work of aftermarket coachbuilders.
One thing's for sure: Assuming it ever gets made, anyone who buys it wants an XJ in name only; the modifications have removed almost all of the grace of the standard sedan. Estimated to be more than three feet longer than an XJ, the stretched rear doors are backed by an even more stretched rear section that, in losing the trademark XJ C-pillar (the D-pillar on this car), adds all sorts of ungainliness to its backside. What's more, the roof rises from front to rear, we can only assume to make room for people with large hats. Or the NBA player that the Chinese call "Sweet Melon."
Head over to AutoSohu for more photos from the application, if you're sure that's what you really want.