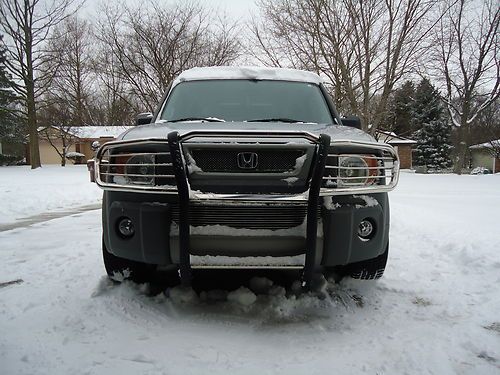 This 2004 Honda Element  Meticulously Maintained, it comes with a front brush-guard, oversize running boards, fog lamps, arm rest, chrome wheels, CD player. I put all new front and rear brakes and rotors on vehicle, new battery, new tires, and I think the tires where rated for 30,000 miles, new drive belt, two new blue headlight bulbs. All maintenance perform that was required always use synthetic mobil one motor oil for high miles vehicle, service perform by owner manual which includes lubrication of the four wheel drive system, and transmission flush etc... The only thing I didn't do was the radiator flush because it didn't need it. NOTE: Please keep in mind this is a used SUV and is not being sold or represented as new, the air bag light has always been on since I purchased truck from the car dealer but never presented to be a problem. Driver side door locks but sometimes key want unlock the drivers door, may have to unlock from passenger side until you can get lock fix, driver side window get off track if you let window all the way down but will let down but just not all the way down inside the door, right fog light bulb needs to be replace, the back rear windshield wiper doesn't work. Now you know what I do about this truck, other than the things I mention this truck runs, and drives EXCELLENT and hasn't giving me a bit of problems other than general maintenance which is expected. This truck will make someone a reliable vehicle, all it needs is a good cleaning. USA bids only please... 517-706-7695 If you have a direct question and you need immediate assistance please don't hesitate to call, thank you!

The reveal of the next-generation Honda Civic Type R has been a gradual one. First Honda showed us a camouflaged prototype, then let us drive one at its Japanese proving ground and followed up with a concept at the Geneva Motor Show. Now with the Paris Motor Show looming on the horizon, it has revealed yet another concept to keep hot-hatch enthusiasts on their toes.
The second Civic Type R concept appears almost identical to the first one - right down to the aggressive aero kit, quad exhaust tips, oversized wheels and ultra-low-profile rubber - but wears a new coat of Superman blue with go-fast decals. With its release, however, Honda has confirmed some of the salient details set for the production version.
In the nose sits a 2.0-liter turbo four with 276 horsepower and a 7,000-rpm redline, mated to a six-speed manual transmission. Adaptive dampers and a "steer axis" system promise to keep the power under control, while a push of the +R button tightens up the suspension, steering and torque mapping.