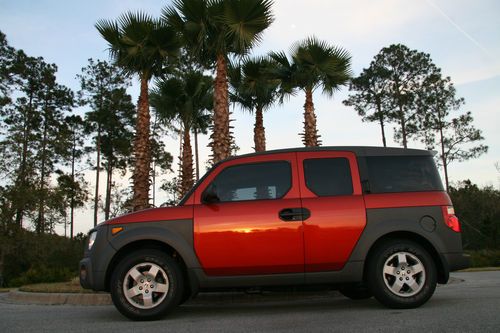 Her name is "Toastie" and she has been lady driven. Toastie is a real find and, to your advantage, I'm a little OCD about my cars. We have owned her since 2007 when she only had about 40,000 miles on her. The guy who owned Toastie before us was even more OCD about his cars than I am. Toastie has been meticulously maintained using ONLY fully synthetic motor oil. If something broke on her, we fixed her like you would a baby. She has had a new battery last year, new front struts and springs about three years ago, new alternator and belt about two years ago, new air conditioner compressor and fan motor about three years ago, new idle air control valve last summer, and brand NEW crystal clear headlights last month. The paint is in great shape with surprisingly few nicks. Even better the plastic side panels are in excellent shape having been coated regularly with conditioner. There are a few dents and scratches that you can see in the pictures. The driver's seat is cracking so I ordered the Honda seat cover to get a good fit. The rear passenger seat has a little tear in the fabric. The steering wheel is in great shape having been covered most of the time. The car has a great professionally installed aftermarket radio with GPS navigation. I would get in this car and drive it to Alaska right now. Better yet, I'd put a 19 year old daughter in it and send her to Alaska right now. You have an excellent opportunity to but a great used car from the folks who have owned her and babied her for the past six years. Shoot me a message if you have questions.