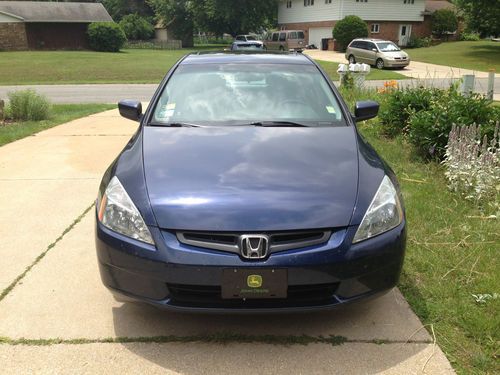 Condition: UsedA vehicle is considered used if it has been registered and issued a title. Used vehicles have had at least one previous owner. The condition of the exterior, interior and engine can vary depending on the vehicle's history. See the seller's listing for full details and description of any imperfections.Seller Notes:"Crack in windshield from a small rock."

This is a great Honda Accord with LOW MILES. I bought it at 45,000 miles last year. I bought it from a dealer who had bought it wrecked and he fixed it up. All damage was is the rear nowhere near the front. Engine is great, feel free to inspect it. I have enclosed a picture of the repair in the rear. The car is very clean. Leather is good, no rips or tears. NO rust. Tires are fairly new. Bought last year. Bridgestone Serenity Plus. There is a small nick/chip in the windshield from where a rock hit it. I bought it like that and got used to it. Please contact me for more info or for pictures of certain things. Thank You!