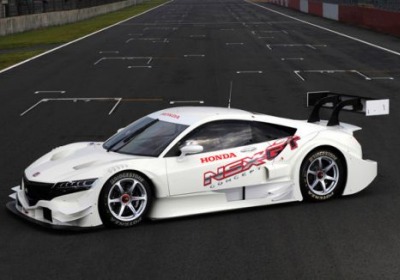 Not to be outdone by Lexus and its new LF-CC racecar, Honda is also bringing a little more excitement to the Japanese Super GT racing series with its NSX Concept-GT. Yes, just like the original NSX, this racecar will wear the Honda badge in its home market when it replaces the current offering in that series, the non-production HSV-010 GT, which itself replaced the NSX in the series back in 2010.

Looking exactly how we'd imagine a race-prepped 2015 Acura NSX to look, this racer is mean and sexy at the same time, and it will be powered by a racing hybrid system with a turbocharged four-cylinder mounted behind the driver. No word on power output, but it will compete in the GT500 class, which restricts power output to 500 horsepower. Unlike the Lexus racecar, the Honda NSX Concept-GT will being competing this season starting with this weekend's race at the Suzuka Circuit before running the full 10-race 2014 season. Scroll down for the short press release.

Honda has unveiled the NSX CONCEPT-GT, a racing machine to enter into the GT500 class ofthe 2014 SUPER GT Series* Round 5 "2013 AUTOBACS SUPER GT" at Suzuka Circuit.

The NSX CONCEPT-GT is a dedicated racing vehicle based on the NSX Concept, the next-generation super sports car that made its world debut in January 2012 at the North American International Auto Show in Detroit.

This vehicle complies with the 2014 regulations on GT500 vehicles set by the Japan Automobile Federation. Along with a mid-mounted 2.0 L inline direct-injection 4-cylinder turbo engine, the vehicle is equipped with a racing hybrid system.

Prior to today's debut of the NSX CONCEPT-GT, American Honda Motor Co., Inc. showcased the running of a prototype NSX at the Mid-Ohio Sports Car Course on August 4, the final day of the Honda Indy 200 at Mid-Ohio.