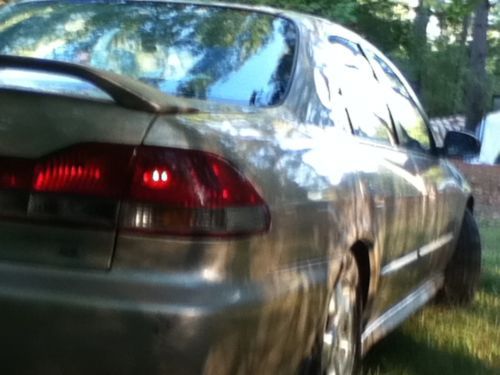 Condition: UsedA vehicle is considered used if it has been registered and issued a title. Used vehicles have had at least one previous owner. The condition of the exterior, interior and engine can vary depending on the vehicle's history. See the seller's listing for full details and description of any imperfections.Seller Notes:"2 minor dings, one in fender from car dolly(whoops]and one on rear pillar passenger side, dent doc said he could fix no sweat"

This is a very dependable, safe nice honda, it features a moonroof, and every option Honda offered in 2002 top of the line, 18k plus new, it was a certified preowned by Bale or Russell Honda of Little Rock, I cant remember which, I have all pertinent paperwork on vehicle. Since 2007 I have put on oem factory rear wing ,and just basic maintenance , brakes front and rear, it is disc all around, replaced cd changer, original quit. I just installed new headlights that are as bright as any on the road. Has German blue bulbs in them. puts out a very natural white light. All electronics,windows , locks , ,roof,traction, cruise control have and still do work . Ice cold ac, I just put brand new tires on the front.and new spark plugs, also about 2 years ago an air filter. this car has 200 horsepower and really moves and performs well. it is a vtec v-6 engine. , the car is not perfect but pretty nice and very safe and reliable. feel free to email me with any questions, I am also selling this locally so reserve the right to end auction at any time.
l