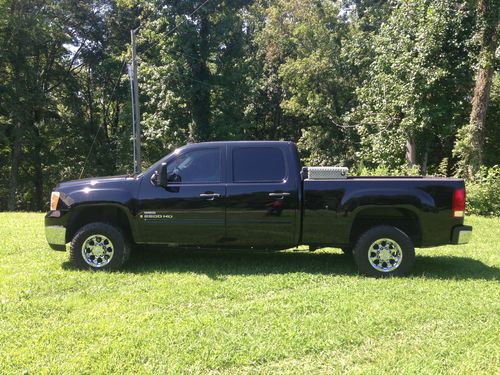 Condition: UsedA vehicle is considered used if it has been registered and issued a title. Used vehicles have had at least one previous owner. The condition of the exterior, interior and engine can vary depending on the vehicle's history. See the seller's listing for full details and description of any imperfections.Seller Notes:"Small Scratch/dent driver side rear passenger cab size of a dime, small crack in leather in center console maybe 1 inch long"

This is a 2007.5 GMC Sierra 2500HD 4x4 6.6L Duramax Diesel and has the 6Spd automatic Allison Transmission.  It's black with light grey interior.  It is loaded.  Great shape, and I hate to see it go, but just have to much stuff.  It gets great fuel mileage, as it is equipped with H&S Black Mini Maxx Programmer, RBP Turbo Back Straight Exhaust, and a AFE Cold Air Induction Kit.  It has 265/75/r16 Goodyear Duratrac tires which are around 65% tread. This truck has the LINE-X bed liner still under warranty and comes up on the top of the bed rails.  My truck has never had a gooseneck ball, and has only pulled my BBQ trailer, and my 4Wheeler Trailer.  Truck was just serviced and I've changed oil every 3000 miles using Rotella oil only.  Tractor supply Stainless toolbox will go with the truck.  I do not need help selling the truck, and I will reserve the right to cancel auction as the truck is for sale locally.