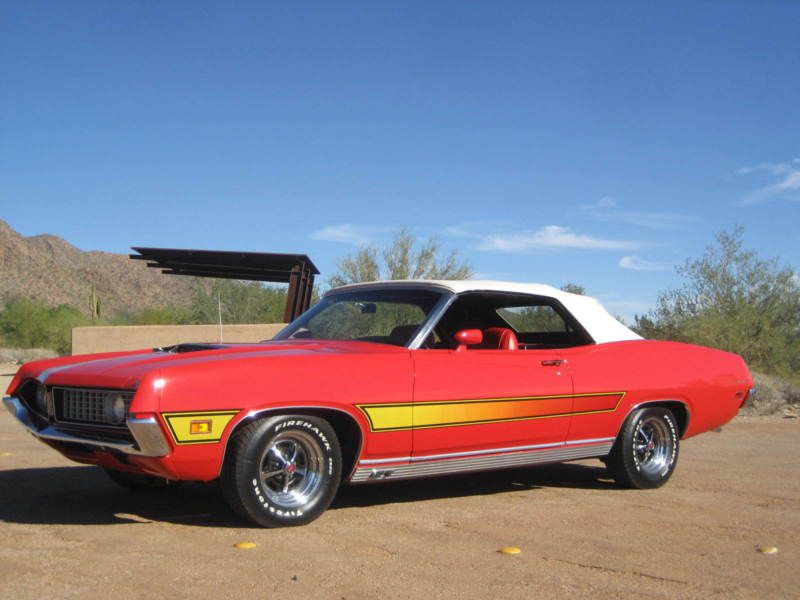 If you have any questions or would like to view the car in person please email me at: kalynverhulst@juno.com .

Here is one eye popping 1971 Torino GT convertible that stops people in their tracks. Only 1613 GT convertibles were made in 71 which makes them very rare and collectible today. This beauty is 1 of only 31 made with this paint and trim combination of bright red and Vermillion bucket seat interior. It's probably the only original one left on the planet. If you want a GT convertible this incredible Arizona beauty is the one you want. A Deluxe Marti Report documents the build, which is included.

The car is in excellent condition having been in Arizona from 1971 until 2000. It was restored in the midwest between 2002 and 2010 and then brought back home to Scottsdale soon after that. The paint work is stunning having been cut and buffed to a glass like finish. There are zero issues with the paint. All the jambs and inside the trunk look original and are nice. No signs of filler are present, Undercarraige looks original and nice and solid. .All the trim and chrome is excellent along with all the rubber and crystal clear glass and a perfect white power top with glass window. The laser stripes are perfect also. All the gaps are right on and doors, hood and trunk shut perfect. Five Magnum 5oo's with excellent Firestone rubber. The spare has never been on the ground. Under hood and trunk are fully detailed and complete.

Motor is the original rebuilt 351 Cleveland 2bbl with a Select Shift C4 automatic transmission. Motor and trans run and shift nicely as expected. Included is a thick folder documenting all the replacement parts and service performed over the years. Basically everything mechanical has been addressed over time and parts replaced as needed. This is a power steering, power disc brake car with cold air conditioning and tinted glass. Everything works except the radio and the high blower fan position. Even the headlight warning buzzer works,

The interior has been preserved beautifully. There is only a minor wear spot on the driver's seat lower bolster that is not even an issue and can be touched up easily. Door and quarter panels are outstanding along with the dash and console and shifter. . The original factory boot is nice also. Carpet and floor mats are perfect. All window regulators and door locks work flawlessly. This orange interior shown outside in the sun is a knockout.