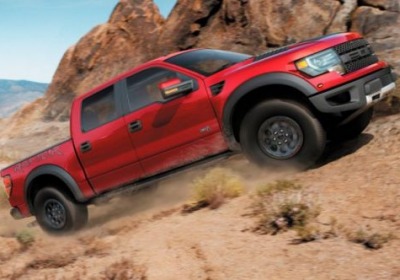 Ford can't seem to build F-150 SVT Raptors fast enough. The off-road-ready trucks have been one of the Blue Oval's most reliable sellers, with record sales in eight of the last 10 months and a 14-percent jump in 2013. That's impressive enough, considering that the least expensive Raptor starts at $44,000. Factor in the modded F-150's fuel economy (it's rated at 11 miles per gallon in the city and 16 on the highway) and a national average gas price, as of this writing, of $3.55 per gallon, and its success is as unlikely as Ford's home team, the Detroit Lions, winning the Super Bowl this year (sorry, Lions fans, we're just quoting the experts in Vegas...).

Yet for some reason, Raptors spend an average of just 15 days on dealer lots before being snapped up, which is a quarter of the 60-day industry average. According to Ford's truck group marketing manager, Doug Scott, it's capability that keeps the Raptor selling strong. "What's helping drive Raptor sales is that Raptor delivers unmatched off-road performance to our customers. Raptor is also proof of our commitment to offer a truck for every customer and continuously improving them to meet our customers' evolving needs."

To address the strong demand for Raptors, Ford will bump production from three trucks per hour to five. Not much, we agree. But building an extra 48 trucks per day, at most, seems like a prudent way of addressing demand without oversaturating what is ultimately a niche market. Check out the press release below for more.

Raptor sales have hit record highs in 8 of the past 10 months
Ford growing the market for increasingly specialized full-sized pickup trucks
Since launching in 2009, production has increased from two trucks per hour to five

Hitting the market in 2009, Raptor has had record sales during 8 of the past 10 months and sales are up 14 percent in 2013. Raptor is also one of the fastest-turning vehicles in the automotive industry, with only a 15-day supply on dealer lots.

Day supply is common industry measurement of retail customer sales demand. The lower the figure, the less time a vehicle remains on a dealer lot before it's sold. A 60-day supply is considered average for the auto industry.

"What's helping drive Raptor sales is that Raptor delivers unmatched off-road performance to our customers," said Doug Scott, Ford truck group marketing manager. "Raptor is also proof of our commitment to offer a truck for every customer and continuously improving them to meet our customers' evolving needs."

The growing demand and increase in production points to a larger phenomenon of increased specialization in the full-size pickup category.

While trucks traditionally have been bought by businesses and individuals to do the hard work of building and moving America, buyers have increasingly flocked to pickups offering exceptional luxury, performance or in the case of the new Raptor Special Edition, both.

A Raptor development imperative has been continuous improvement, so Ford expanded Raptor's footprint for 2011 with a four-door SuperCrew® model joining the two-door SuperCab original.

For 2013 industry-exclusive beadlock-capable wheels were added to help increase grip in low-traction conditions, along with high-intensity discharge headlamps for improved visibility. SYNC® with MyFord Touch® also was made available for added connectivity.

The front axle features a Torsen differential with 4.10:1 gearing. The rear axle is also 4.10:1, with a high speed electronic-locking differential.