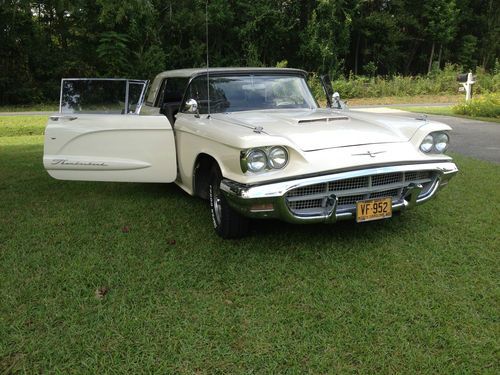 Up for auction is my 1960 Ford Thunderbird.  If you are looking for a nice vintage daily driver, this is the car for you.  The interior has recently been install which includes new headliner, seats, sunvisors, door panels and carpet.  The original 352 V-8 motor and Cruise-a-matic transmission have recently been rebuilt.  The car is dependable and runs out great.  The rear end gear ratio is 3:10.  The floor pans, frame and trunk pans are in very good condition.  The master cylinder and power steering pump have been recently rebuilt.  The radiator, gas tank, cooper cobra radial tires, 14" magnum rims, belts, water pump, spark plugs are new.  The paint is okay for a daily driver.  I am selling this car as-is, no warranty and no refund. Purchase this car and drive it home.   A $1000 non-refundable deposit is required within 48 hours after auction has ended.  Full payment must be received prior to vehicle being picked up or shipped.  The vehicle is for pickup only.  Buyer responsible for all shipping.  This car is listed locally so I have the right to pull it from auction at any time.  Please ask questions prior to bidding.  If you have questions you may contact me at 910-625-6169.  Serious bidder only.