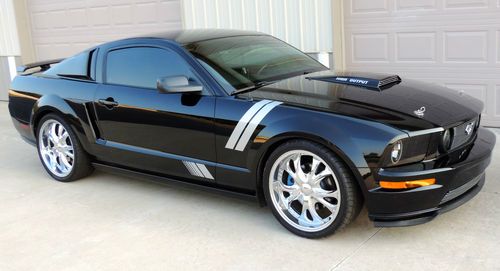 Condition: Used: A vehicle is considered used if it has been registered and issued a title. Used vehicles have had at least one previous owner. The condition of the exterior, interior and engine can vary depending on the vehicle's history. See the seller's listing for full details and description of any imperfections. ...
I am selling my 2006 Mustang. It is a Premium Edition Gt. 56xxx miles on her. Runs amazing and sounds awesome. Spectra Cold Air intake, Diablo Tune, 20 Inch chrome rims with some minor wear. My color dash. Leather interior. Very loud shaker 500 Audio system. Low profile high performance front tires and Low profile high performance yakomoto rear tires. Blacked out third brake light. Blacked out taillights. Ford suspension tower strut. Cherry bomb exhaust. Hood scoop. Aftermarket Chrome grille. Side skirts, Window cover, and side vents. Chrome dash and cup holder trim. Tinted windows( Excellent shape). I will be taking out the smoked headlights and foglights and putting the stock ones back in, along with the stock battery which may need to be replaced soon. Silver wheel well stripes and saleen style decals. Five speed manual transmission. Car is so fun to drive and I hate seeing it go. I am a student so you can get ahold of me from 6-10 at (574)551-5261. You can contact my dad at (574)551-5130. Feel free to text us at anytime with any questions. SERIOUS BUYERS ONLY PLEASE!!! Thanks!