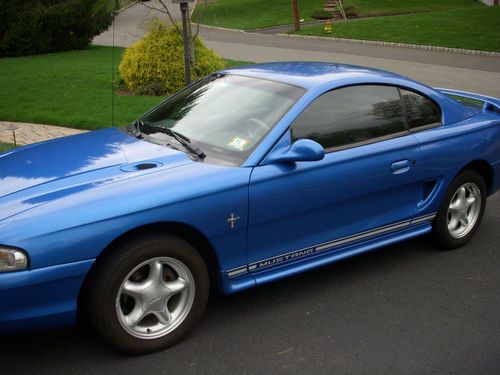 Condition: Used: A vehicle is considered used if it has been registered and issued a title. Used vehicles have had at least one previous owner. The condition of the exterior, interior and engine can vary depending on the vehicle's history. See the seller's listing for full details and description of any imperfections. ...
I am the original owner of this 1998 For Mustang
-It is an amazing Mustang in pristine condition. The interior is in great shape!
-16 inch rims
-Continental Xtreme Contact tires, a year old
-New Cobra head lights and fog lights
-Dual exhaust chrome dipped pipes
-K&N cold air intake
-CD/tape, AM/FM radio
-Custom painted side view mirrors
-Cruise Control
-Power windows and driver seat
-Back seats fold down
-Sport spoiler
-Side door racing stripes

This car runs great. The only thing it will need replaced eventually is the rack and pinion. I replaced the power steering pump which was the original one and lasted all these years. The rack and pinion is around $150-200 and is not needed just yet.
Please email me with any questions I can help you with. I am selling this car as is.
This is an amazing car that I truly love and have kept great care of.