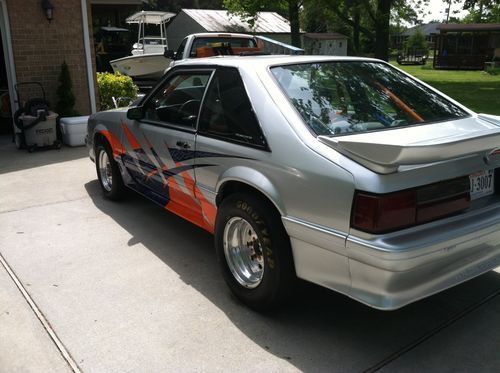 1989 Ford Mustang GT, drag/street car. This car is ready to have fun with on the street or drag race track. This mustang is set up for 1/8 mile drag. Since this motor was custom built this car has approximately 12 passes on the motor and ran in the mid 6's in 1/8 on all motor. This car has a custom paint scheme and a powder coated roll cage and is fully set up for drag strip . (To many parts to list.)  Has built c-4 tranny and aftermarket drag rear end with 1/8 mile gear ratio set up. The Motor is pushing roughly about 500hp or so. The motor  was built for nitrous set up but I never installed it or ran nitrous . This car also has the full trick flow setup, cam,heads,intake and fuel injection set up. The car has drag bars and linked underneath. It also has preloaded air bag in right rear for preloading the suspension on drag strip. Car has drag shocks and aftermarket coils. The mustang has weld wheels and drag tires all the way around. The rears are 10 inch drag slicks. The car is equipped with all gages and saftey harness for driver. Also the mustang still has full interior still inside of car. The pictures speak for themselves its a very nice car professionally done ready for someone to enjoy her. I just don't really have the time to mess with it anymore so my loss is your gain.  All the parts used on this car are quality parts that were done by a professional shop in my area.  I spent a pretty penny setting this car up like it is. Car is a eye catcher at the track or on the street.

As is no warranty applies.