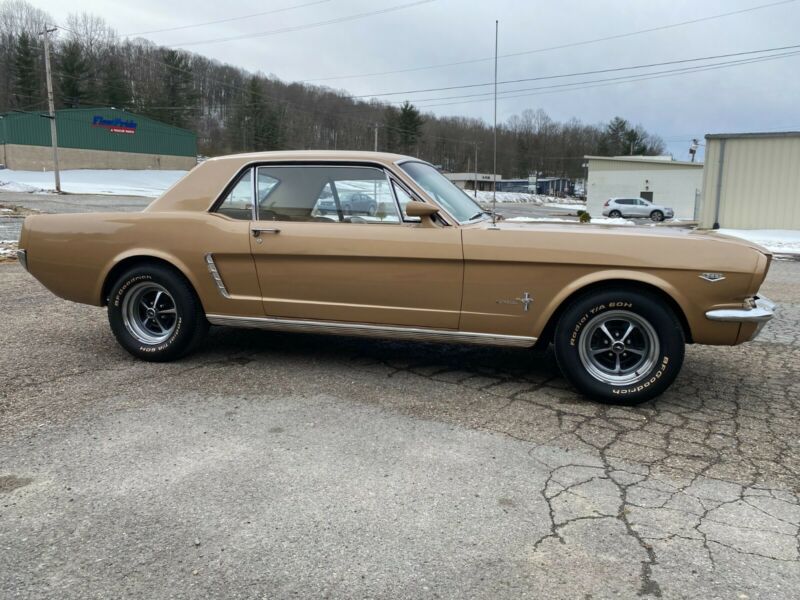 You are looking at a super cool 1964.5 Ford Mustang K Code 289 High Performance coupe that was built by Holman
Moody in the late 1960’s. This car has been garage kept its entire life and is solid as a rock top and bottom.

The car is an absolute beast with a 289 HIPO that will rev to 7500 RPM thanks to the Holman Moody built engine,
Lemans Camshaft, 2x4 Cobra Intake, and a 3.89 rear gear ratio.

The car is wearing its factory color combination of Praire Bronze with palamino interior. The car came stock with
the rally pac 8k tach gauges from the factory.

The engine sounds great and has tons of power.

The engine block has the matching K code VIN stamp.

The 4 speed toploader also has its matching K Code VIN stamp on the bottom.

Factory 9” reared with the tapered tubes specific to the HIPO cars.

The car has been painted before and has a driver quality paint job. The underneath is very dry with no patches or
panels that have ever been replaced in the floor. Very clean undercarriage.

The trunk floor is extremely nice and original also. Frame rails front and rear are clean and dry.

The interior is very original and in great condition. Extra gauges were added by Holman Moody in the glove box door
and they are functional. Oil cooler is currently not hooked up, and the car needs a heater core as its bypassed.

The tires have flat spots from where the car isn’t driven very much so either it will need tires or driven to try
and work the flat spots out.