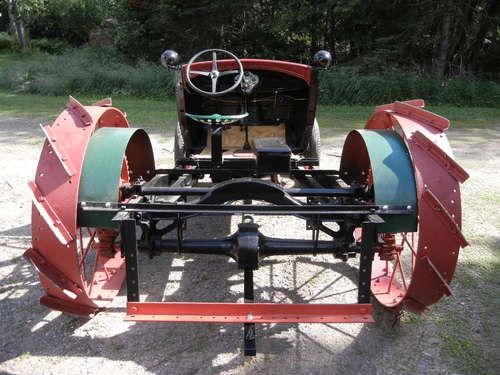 Condition: UsedA vehicle is considered used if it has been registered and issued a title. Used vehicles have had at least one previous owner. The condition of the exterior, interior and engine can vary depending on the vehicle's history. See the seller's listing for full details and description of any imperfections.Seller Notes:"Used Conversion tractor, used in early farming"

1929 Ford MODEL A Conversion tractor.  This is a Peru Tractor conversion mounted on a Model A Ford drive train.  This Tractor Conversion assembly was manufactured by the Peru Plow Works company , located in Peru Illinois. They were in business making farming equipment from 1851 to 1941.  The radiator on the engine is not a stock model A ford item.  The stock radiator and shell I have in storage and will go with the sale.  This is a unique vehicle used in early farming when farmers needed a tractor and did not buy a factory Ford Fordson.

Buyer is responsible for transportation and delivery of vehicle.  This is a farming vehicle and does not require a vehicle title.  Mileage of vehicle unknown. Buyer to make a deposit of $500 to Paypal  at time of sale and balance due in 7 days of sale