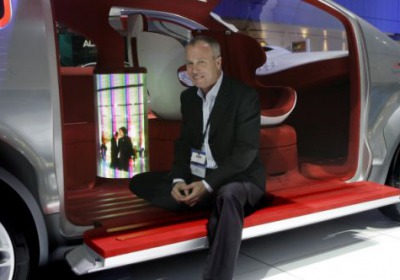 Ford's highly influential head of design, J Mays, has announced that he'll be retiring from his position after 33 years in the industry, 16 of which were at the Dearborn, MI-based company. Upon departure, he'll be succeeded as group vice president of design by Moray Callum. If that last name sounds familiar, yes, he's the brother of Jaguar's Ian Callum.

It's difficult to explain just how big of a role Mays had on not just Ford's design over the years, but on the entire industry. Before heading to Dearborn, Mays worked for Audi, BMW and then Volkswagen, where he was involved in concept cars that paved the way for design icons like the first-generation Audi TT and the Volkswagen New Beetle. As for his Ford resume, it's extensive.

Mays joined the company in 1997 as design director for Ford, Lincoln, Mercury and Mazda, as well as the Premier Automotive Group (Volvo, Land Rover, Jaguar and Aston Martin). He was heavily involved in the Ford Fusion, Focus, Fiesta, Taurus, F-150 and Mustang, while also contributing to concept cars like the Atlas, Evos, 427, Forty-Nine, Shelby GR-1, Lincoln MKZ and the MKC.

"The bold and sophisticated design language that J Mays pioneered will be visible for years to come in Ford vehicles and the auto industry overall. In addition to his talent as a world-class designer, J has brought together one of the most talented design teams in the business. We are grateful for his creativity and leadership and congratulate him on his retirement from Ford," said Ford COO Mark Fields.

While Mays' shoes are hard to fill, we suspect Callum will be able to pull it off. He's been responsible for all North and South American design since 2006. Before that, he spent five years at Mazda. He's had his fingers on the newest Fusion, Explorer, Mustang, EcoSport and Lincoln MKZ.

Also retiring from Ford is Jim Tetreault, vice president of North American manufacturing after 25 years of service with the Blue Oval and 36 years in the industry. He'll be succeeded by Bruce Hettle. Scroll down for the official press release from Ford.

Throughout his 16-year career at Ford, Mays led development of the global Ford design language evident in most of the vehicles the company produces around the world. In particular, Mays led the teams that developed the design for the highly acclaimed Ford Fusion, Focus, Fiesta, Taurus, Mustang and F-150. He also was responsible for several significant concept vehicles, including the Ford Atlas, Evos, 427, Forty-Nine, Shelby GR-1, Lincoln MKZ and MKC.

Mays joined Ford in 1997 as vice president, Design. He was named group vice president in 2003 and one year later took on the expanded role of chief creative officer.

"The bold and sophisticated design language that J Mays pioneered will be visible for years to come in Ford vehicles and the auto industry overall," said Mark Fields, Ford chief operating officer. "In addition to his talent as a world-class designer, J has brought together one of the most talented design teams in the business. We are grateful for his creativity and leadership and congratulate him on his retirement from Ford."

Callum will lead the design of all concept and production vehicles for the Ford and Lincoln brands globally. Since 2006, Callum has had overall responsibility for the design of all cars and trucks designed in Ford's North and South America studios and the new Lincoln products. His successes include the new Ford Fusion, Explorer, Mustang, EcoSport and Lincoln MKZ. Prior to that, Callum led Mazda's design transformation from 2001 to 2006, based in Japan.

For the past five years, Tetreault has been responsible for Ford's North America manufacturing footprint – its largest in the world, with more than 30 manufacturing plants. Tetreault played a key role in ongoing efforts to improve manufacturing flexibility and efficiency. He also oversaw a product expansion in the region and the company's seamless conversion to global platforms. Prior to this, Tetreault served as vice president, Ford of Europe Manufacturing, for three years and held numerous positions in plant operations and staff functions throughout his career.

"Jim's strong leadership and attention to detail will be missed," said Joe Hinrichs, executive vice president and president, The Americas. "He has brought out the best in people and in our global manufacturing process across two continents. We are grateful for Jim's leadership, and we wish him the best in his retirement."

Hettle, currently executive director, Global Vehicle Operations Manufacturing Engineering, will be responsible for all North America manufacturing facilities. In his new role, Hettle will put a strong focus on the company's goal of increasing manufacturing flexibility, efficiency, quality and productivity. Hettle has spent his entire 27-year career in manufacturing with Ford, and has led the company's global manufacturing engineering organization for vehicle operations since 2008. In addition to other leadership roles, he has served as director, Manufacturing Business Office, plant manager for Wayne Stamping and Assembly and Edison Assembly. He will report to Hinrichs and to John Fleming, executive vice president, Global Manufacturing and Labor Affairs.

Mulloy was appointed to his current position in 2005. He has been responsible for global labor policy and negotiations covering Ford's approximately 117,000 hourly employees. He led the company's successful 2007, 2009 and 2011 contract negotiations with the United Auto Workers. His career includes a variety of positions in Human Resources and Labor Affairs, including serving as the company's most senior HR leader in The Americas, Australia and Manufacturing.

"Marty's enthusiasm and love for Ford is infectious," said Fleming. "His dedication to collaboration and inclusiveness has strengthened our relationships with the UAW and our hourly employees around the world. Marty will be missed, and we are grateful for his three decades of service."

In his new role, Dirksen, who has been executive director, U.S. Labor Affairs, since 2007, will be responsible for labor negotiations and labor policy globally for the company's union employees. He joined Ford Motor Company in 1985, and has served as the senior HR leader in Ford Credit, Manufacturing and Quality, and Australia prior to moving to the U.S. Labor Affairs position seven years ago. Together with Mulloy, Dirksen played a key role in leading the company's 2007, 2009 and 2011 UAW negotiations. Dirksen will report to Fleming and to Felicia Fields, group vice president, Human Resources and Corporate Services.

Ford also is announcing the election of Steven Armstrong as a company officer and president, Ford South America, reporting to Hinrichs.

For the past 18 months, Armstrong has been president, Ford of Brazil, leading all aspects of the company's largest business unit in South America. Prior to this, Armstrong served as chief operating officer, Volvo Cars. Throughout his more than 25-year career, Armstrong has held a variety of senior management and purchasing positions with Jaguar, Ford of Europe and Volvo.

All retirements and appointments are effective Jan. 1, 2014.