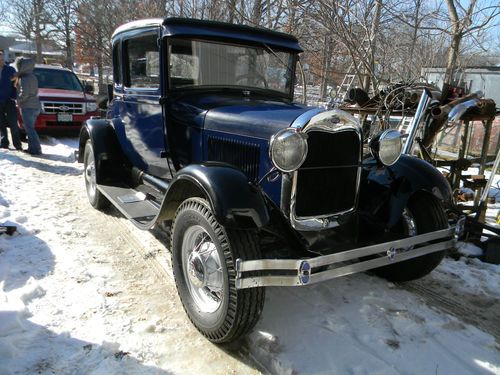 I have for sale today a really neat 1929 Ford Model A Sport Coupe. This car is in very good shape for it being a 80+ year old car, it has spent most of its life in the South so it is very solid and it is all original Henry ford steel, not a bunch of cheap reproduction parts. It is a older restoration than has been driven and used, but still appears very nice. The car starts and runs easy, everything works like it should except for the speedometer has quit, may be the cable, have not looked into it. There have been some upgrades and changes to make it more driveable, like a 6 volt alternator, later model 16 inch wheels with 6.50 tires, brighter lights. Brakes and tires are great, engine, carb, clutch, trans  all work like they should. I have included many pictures to show what I can about it. This is not a trailer queen, but it looks awesome running down the street in a parade or sitting in your driveway.

I reserve the right to end auction at any time as I have this car for sale locally, so if you are SERIOUS about it, you should bid often to protect your chance to OWN it! If you have any questions about the car itself or something about the transaction process please call or text 573-467-1332.