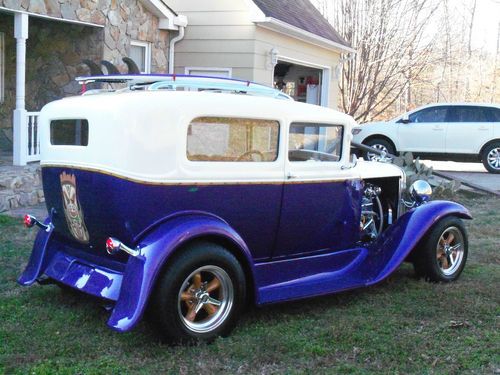 beautiful 31 Surf Rod just finished from ground up awesome car  pics cant do justice  its is a most unique  we used real bamboo in the interior and tiki mask for the theam  Bamboo Voodoo this car runs and drives great the custom paint is absolutely Beautiful it has hand painted bamboo between color scheam and a custom matched surf board on the roof ,car has midly built 350 with350 trans and b&m 2500 stall  sounds awesome  car is equipped with ac and great sounding stereo system  it has mustangll andford 9in. rear interior is beautiful with carmel ostrige and lite brown leather rool&pleat insertsalllghts have modern style bulbs and this machine is ready to get outand show off   any questions  please call me at 828 287-5974 joey thanks and good luck bidding