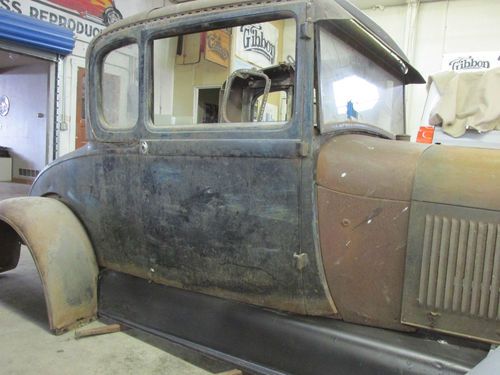 Good project model A coupe. Body is in decent condition, doors are real nice, no holes. Very few dents in body at all. Doors shut and fit nicely. Some rust in front cowl sides, and rear wheel wells. rear lower deck is real clean. Deck lid is rough but not rusty. Sub floor in real good shape. Front fenders are real nice and very useable. Rear fenders are rough. Garnish moldings and hood are included. Passenger door has glass and regulator, both doors have latches. Doors hinge nicely with good fit and function. All hinges are good. Frame and front axle assembly included. The gas tank is in good shape. windshied frame is decent, NO TITLE.... this car is in central Nebraska. You pick up here or arrange transportation. It is all barely bolted together so it can be dismantled and loaded into the back of a full size pickup.