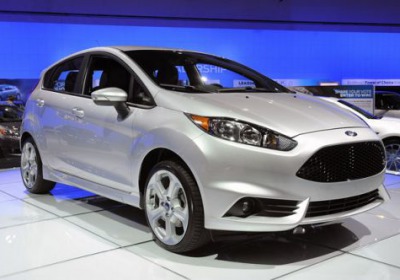 The 2014 model year brings a whole host of changes to Ford's Fiesta B-Segment fighter, the most important of which (to our enthusiast eyes, anyway) is the addition of a potent new ST model. The US-spec hot hatch was first shown at the 2012 Los Angeles Auto Show last November, and thanks to Ford's build-and-price site, we've now learned that the Fiesta ST will slide in at $21,400 when it goes on sale later this year (*not including $795 for destination).

Under the hood of the ST is a turbocharged 1.6-liter EcoBoost inline-four good for 197 horsepower and 214 pound-feet of torque, mated solely to a six-speed manual transmission. Ford hasn't released performance data on its pint-sized puncher just yet, but know that these numbers make the Fiesta ST ever-so-slightly more powerful than the larger Volkswagen GTI while returning an estimated 34 miles per gallon on the highway.

Elsewhere in the lineup, the standard Fiesta also gets a smattering of improvements for the 2014 model year, including a new 1.0-liter three-cylinder turbocharged engine and revised exterior styling. Pricing for the 2014 Fiesta sedan starts at $14,000, with the five-door model adding $600 to that number (again excluding the $795 destination fee).

We've played around with the online configurator, and a fully loaded Fiesta ST comes in right below the $27,000 mark. Of course, this price includes niceties like partial-leather Recaro seats ($1,995), a HD audio system with MyFord Touch infotainment and navigation ($795), upgraded 17-inch dark alloy wheels ($795) and a power moonroof ($795). Molten Orange and Green Envy paint schemes will set you back an additional $595, as well.

Here's where things get tricky, though: Option out a larger Focus ST with similar levels of equipment and you're spending $29,825, all-in. Even at the base end of the spectrum, the larger Focus only represents a $2,300 price premium over the Fiesta ST, and in addition to quite a bit more space, the bigger hatch also offers a more powerful 2.0-liter turbo four with 252 horses and 270 lb-ft.

Decisions, decisions. If the Fiesta ST is anything like its bigger brother, we have no doubt it'll be a hoot on the road. In light of their prices, let us know which one you'd have by casting a vote in our poll below, then feel free to drop us a line in Comments.

See also: Who sold the most heavy-duty pickups in 2012? PickupTrucks.com investigates, NHTSA investigating 725k Ford, Mercury vehicles for stalling issue, Amazon looking to bring Kindle to your next car?.