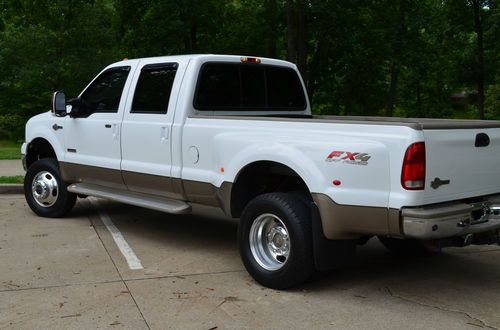 Condition: UsedA vehicle is considered used if it has been registered and issued a title. Used vehicles have had at least one previous owner. The condition of the exterior, interior and engine can vary depending on the vehicle's history. See the seller's listing for full details and description of any imperfections.Seller Notes:"Truck is in very nice shape. Never abused and only shows shows signs of normal wear."

This truck is in excellent condition. The 6.0 liter Powerstroke has just been serviced. Also, the oil cooler was just replaced and the egr deleted. Lots of trouble free miles ahead. No hop up mods, this truck is unmolested. Trans shifts great and mechanically, this truck is flawless. I wouldn't hesitate to drive it anywhere. Outside, the truck is in great shape aswell. Only minor chips and scratches from normal use. Only one ding I can think of, very small and on the tail gate. All six tires are in like new condition etc. The interior is in great shape too. No rips, tears, stains, or foul odors of any kind and everything functions as it should.

This would make anyone a great truck. Its not been abused in any way. No heavy towing what so ever and has never had a 5th wheel or gooseneck hitch installed. Will get 20 plus mpg all day long. Please feel free to message me with any questions you might have.