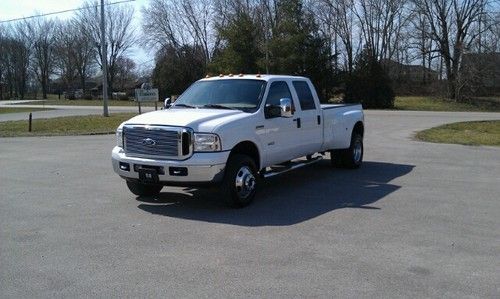 Your looking at a 2007 Ford F-350 crew cab dually with an automatic transmission, it is four wheel drive, has a goose neck hide a ball in the bed, this truck also has remote start, the interior is in great shape and is very clean, the exterior is in great shape with lots of chrome, this truck runs and drives great lots of power, It has 115,000 miles, This vehicle has a salvage title due to it being a theft recovery I have included pictures of the trucks condition when I bought it it was missing the Grill, Tailgate, the carpet, seats, headliner, door panels, various parts of the dash, everything has been replaced and checked to make sure it is in proper working order, This truck needs nothing at this time.If you have any additonal questions, please feel free to call me Larry at 270-842-1808 work or 270-392-4830 cell.  Bid with confidence, 100% feedback!This item is also for sale locally.