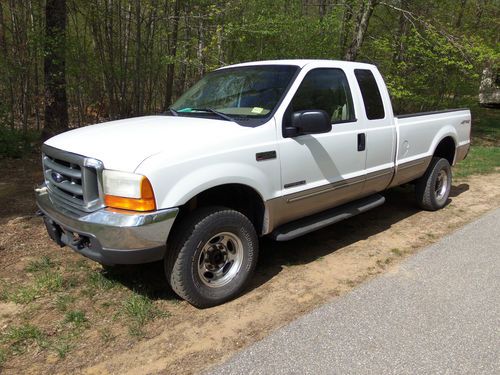 Condition: Used: A vehicle is considered used if it has been registered and issued a title. Used vehicles have had at least one previous owner. The condition of the exterior, interior and engine can vary depending on the vehicle's history. See the seller's listing for full details and description of any imperfections. ...
1999 Ford F350 Super Cab, Lariet 7.3 Diesel.
Great basic work truck. Runs and drives great, no major accidents or frame rot. Just (400 miles ago) purchased and had professionally installed new Automatic Transmission (w/ 3-36 month warranty), Starter, Flywheel and two High Quality Exide Gel Batteries, as well as changed all fluids and filters. This alone was over $ 3,700 in repairs.
Some rust on lower inside door panels and one cab corner.Bed has some dings and no tailgate. Seats are worn but have near new expensive camo covers.247,000 miles, lots of highway travel, never a tow rig, just a daily work truck.Truck is stock and never chipped or modified. Basic maintenance taken care.
Local people are encouraged to come inspect or drive the truck.
Truck is sold-as-isThis is a good daily driver or work truck with the highly desirable 7.3 Diesel Engine and 4x4. Truck should last for many years with basic maintenance. Also have matching white ARE truck cab, fully enclosed, side access, no windows and locking that goes with the truck for another $150.