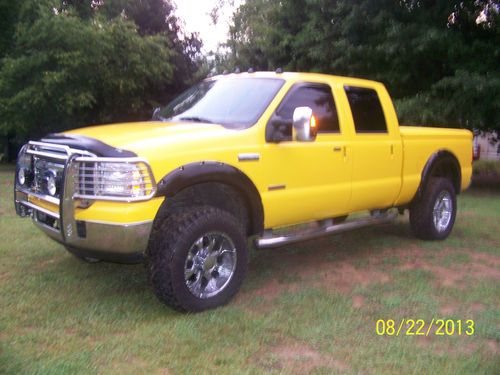 Condition: UsedA vehicle is considered used if it has been registered and issued a title. Used vehicles have had at least one previous owner. The condition of the exterior, interior and engine can vary depending on the vehicle's history. See the seller's listing for full details and description of any imperfections.Seller Notes:"The truck is in very good shape zero rust, looks, runs, drives, great"

Hello all i have a very very nice 06 amarillo edition super duty for sale. The truck is in excellent shape runs and drives great no problems at all, it has 99k miles on it now but will go up as im still driving it now. It  is a crew cab 4x4 with the 6.0l diesel in it with the automatic torque shift transmission, it has every available option in it including, power windows, locks, tilt wheel with the adjustments on steering wheel for climate control and stereo volume and station,cruise etc, adjustable pedals, power heated tow mirrors, integrated trailer brake controller,power moon roof, power rear sliding window, also has the up fitter switches, all black leather interior in great shape, front seats are all power heated very nice in the cold times of the year. All windows are tinted also, I have installed a top of the line double din alpine head unit with ipod hook up an cd player, all brand new pioneer premier door speakers with alpine amp pushing them, 2 10 inch mtx subs behind rear seat with mtx amp pushing them, the stereo sounds absolutely awesome in it, i just put brand new 35x12.50x20 nitto terra grapler mt tires and helo maxx 8 rims with all new lug nuts caps etc over 3000 worth of tires/rims, very nice stainless push bar with a set of KC lights mounted on it there super bright, the truck has a 2 1/2 inch leveling kit on front and add a leaf on rear, nice fiberglass cover on bed, spray in bed liner, class 5 hitch for hauling anything ya want, nice fender flares, bug guard, window ventshades,  the original motor started running bad a couple months ago so it was pulled found a dead cylinder so i had a 80k mile 2007 f-350 motor put back in it and had the egr delete done to it at the same time to prevent future problems it runs very good now no problems at all except the check engine light is on because of the egr delete does not affect it at all, sct makes a tuner to turn the light off and add performance to the truck i just havent had the money to buy it. It has a k&n cold air intake on it and 4 inch exhaust turbo back. I know im forgetting some stuff but this truck is in great shape and i really dont want to sell it but i need to financially right now. The new rims and tires on it wont go with it unless the buy it now is used other wise it will come with the stock rims which are in really good shape to with good tires on them. If you have any questions please feel free to ask, sorry about the pics the camera i have is not the best but if you want other pictures of anything let me know and ill get them. I do have a loan on the truck currently so it will have to be taken care of before the title can be cleared. Thanks for looking and have a good day.

also forgot it has a remote start with alarm system on it.