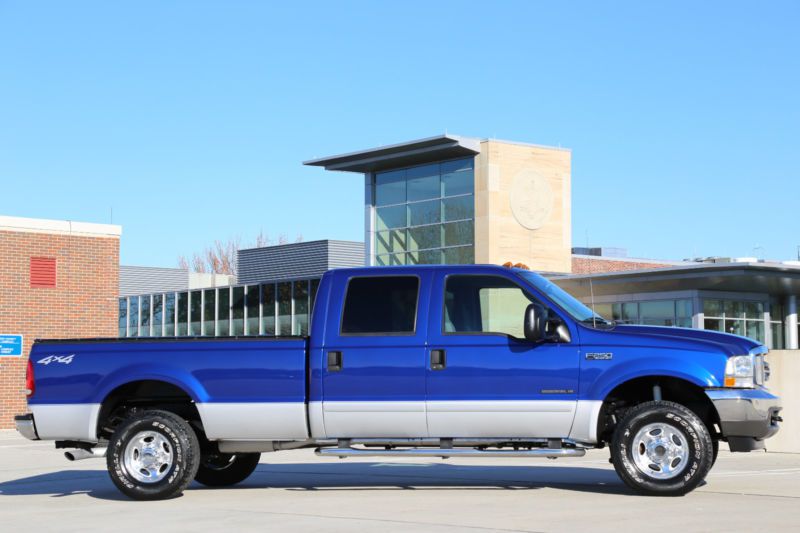 Please email me with any questions or requests for additional pics or something specific at: bobbssudol@bradfordfans.com .

VERY RARE TRUCK WITH VERY LOW MILES
LAST YEAR OF THE 7.3L
YOU WON'T FIND ANOTHER LIKE IT !
2003 FORD F-250 CREW CAB LONG BOX 4X4
~XLT~
7.3L POWERSTROKE TURBO DIESEL
( 88,517 ORIGINAL MILES )
CLEAN CARFAX
GARAGE KEPT
NON SMOKER
NO PAINTWORK
BEST COLOR COMBO
(ELECTRIC BLUE)
ALL THE OPTIONS !
6 DISC IN DASH CD CHANGER
ADJUSTABLE PEDALS
REAR BACKUP SENSORS
SPRAY IN BED LINER
TONNEAU COVER
TOWING PACKAGE
TO MUCH TO LIST ...
TIRES HAVE LOTS OF TREAD REMAINING
ORIGINAL OWNERS MANUALS
2 SETS OF KEYS WITH FOBS
CARPETS PROTECTED SINCE NEW
RUNS AND DRIVES EXCELLENT
ALWAYS SERVICED AND DETAILED
NEVER HAD A TUNER ! ALL STOCK !
HAS A HALF DOLLAR SIZE SCUFF ON TAILGATE THAT HAS BEEN TOUCHED UP
THIS TRUCK IS IN AMAZING CONDITION !
YOU WILL NOT FIND A NICER SUPERDUTY ANYWHERE!
WILL NOT LAST !