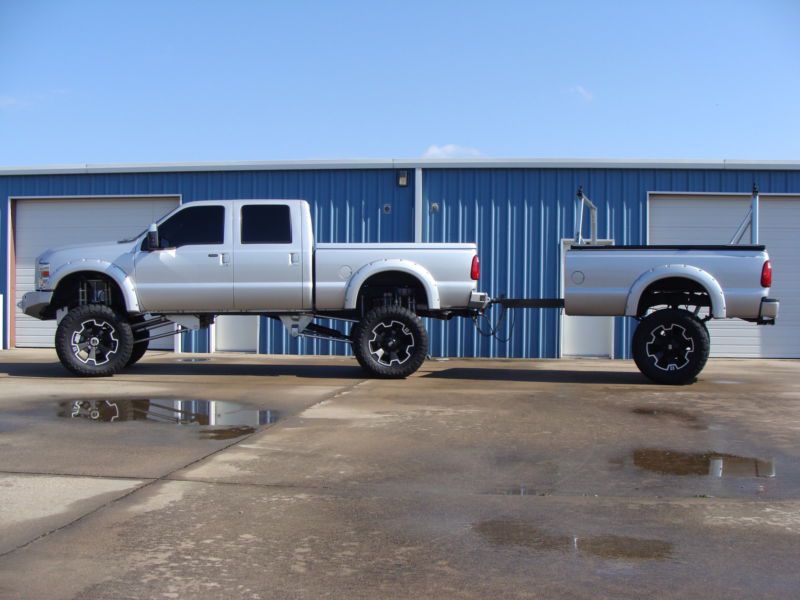 If you have any questions feel free to email: ikeissokotowski@ukbikers.net .

2008 FORD F-250 POWERTROKE DIESEL 4X4 "KELDERMAN AIR LIFT" BEAST!! ONLY 50,026 MILES ON THIS "SEMA SHOW" QUALITY BUILT FORD F-250. KELDERMAN AIR SUSPENSION LIFT WITH IN CAB LIFT CONTROLS WITH 3 PRESETS, (NO IT DOES NOT LEAK DOWN), HEIGHT AT THE BOTTOM OF THE AMP POWER RETRACTABLE BOARDS IS 22" WITH LIFT ALL THE WAY DOWN AND 32" AT FULL LIFT. DUAL RESERVE AIR TANKS ON BOARD COMPRESSOR "4 HORNBLASTER TRAIN HORNS". COMES WITH MATCHING TRAILER (TRAILER DOES NOT AIR LIFT IT IS FIXED HEIGHT) WITH "TRAC RACK" SPRAYED IN LINER MOTORCYCLE WHEEL GRABBER, TOOLBOX WITH 30 GAL. FUEL TANK INSIDE THAT WILL QUICK COUPLE WITH THE TRUCK TO TRANSFER FUEL. XD 22" RIMS WITH TOYO OPEN COUNTRY M/T's 40X15.50X22R. HARD LOCKING BED COVER PROTECTING 3 KICKER AMPS (2) 1500 watt (1) 650 watt FOR A TOTAL OF 3650 watts!! SEALED CUSTOM KICKER LIVIN' LOUD SUB BOX PLUMBED INTO THE CAB "IT WILL RATTLE YOUR TEETH" DRIVEN BY A PIONEER TOUCH SCREEN NAV BLUETOOTH HEAD UNIT. DASHDAQ XL POWER PROGRAMMER. MBRP STAINLESS EXHAUST TURBO BACK. CUSTOM SLOT VENTED HOOD AND CUSTOM GRILL. CUSTOM FRONT AND REAR BUMPERS. BLACK LEATHER INTERIOR HEATED BUCKET SEATS, OVERHEAD TV, SUNROOF. THIS IS A ONE OF A KIND RIG FOR SURE.