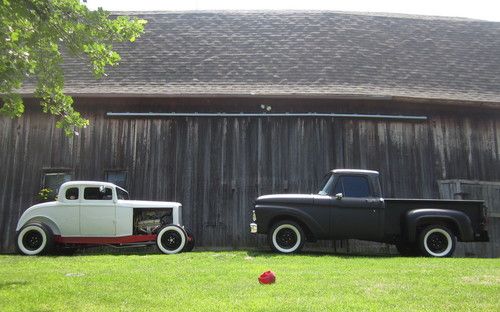 Condition: UsedA vehicle is considered used if it has been registered and issued a title. Used vehicles have had at least one previous owner. The condition of the exterior, interior and engine can vary depending on the vehicle's history. See the seller's listing for full details and description of any imperfections.Seller Notes:"I have been driving this truck around for about a year, since it was drivable so the paint and carpet and such are no longer new but still very nice."

This is a recent restoration, all steel, all Ford. 302 4 bbl motor, 4 speed manual transmission, Power Steering, Power Brakes, Hot Rod Black Paint, not primer. Bluetooth, Satellite Navigation, Leather  Bucket Seats. Originally built in Virginia and rebuilt after many years of storage. I finished this truck as an every day driver, approximately 22 mpg. The 4 speed is now a 3 speed with overdrive but I still have the original hot rod transmission, if a buyer prefers that. I have tried to give an accurate description, What you see is what you get so please ask questions if you have any. This will make someone a very nice truck.  Nothing but positive feed back at the cruise nights here.