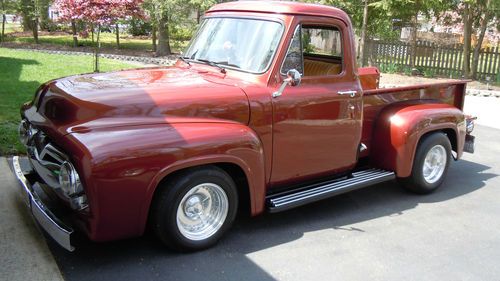 Restored 1955 Ford F100 .  I have owned it for 4 years.  After I purchase it I had it media blasted ( no rust found) primed and painted new rear fenders , tailgate mustang II front End ,new front tires, stainless steel firewall cover, under truck ascent lighting/with remote, ETC. I have receipts for all work done. I am selling only because I want a new hot rod I do this every 4 years or so and loose a ton of money. NO Trade Offers Please !  302, c4 ford 9" poss rear,  rear air shocks,  IFS, A/C, Heat, Defrost emergency flashers, Tilt Wheel, Sony AM/FM CD Player. Everything works great   Any Question email me I will respond quickly not like a lot of other cars I have checked on. I have a link to youtube video if interested email me I can send it to you