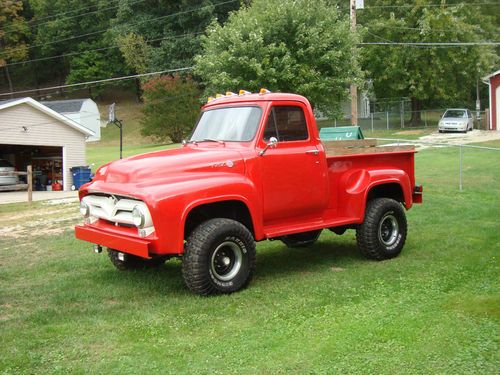 I have a 1955 Ford F100. It is sitting on a 1985 K5 Blazer frame. Good title for the truck. I also have a bill of sale for the frame. Built four years ago. The motor 305 Chevrolet. The motor was rebuilt before installed and has less than 1000 miles. Mileage on running gear is unknown. Many new parts such as radiator, fan , water pump, brakes, shocks, etc. Too many new parts to list. Ive have simply lost interest in the truck. NO TRADES. The truck is not a show truck has a few defects that can be seen in the pictures. 500 dollar nonrefundable deposit due within 48 hours end of auction. CASH ONLY. Payment due within 3 days when the auction ends unless other arrangements are made.