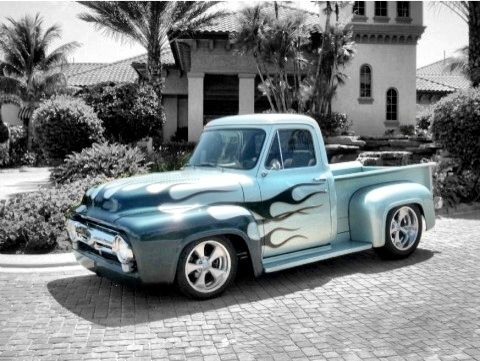 Condition: UsedA vehicle is considered used if it has been registered and issued a title. Used vehicles have had at least one previous owner. The condition of the exterior, interior and engine can vary depending on the vehicle's history. See the seller's listing for full details and description of any imperfections.Seller Notes:"Here is a complete restoration on a beautiful 1955 Ford Custom Cab.Front disc brakes302 V8 Ford Small Block with a C 4 Automatic Overdrive Transmission 302 has been completely rebuilt with all new parts, Healthy CamHeaders with complete custom Exhaust system 9" Ford Rear end Vintage Air Custom cloth interior with matching door panels& Custom matching console.Bedside rails have been shaved of all pockets and holesCustom Tailgate latchCustom Fuel door in Cab side.Custom Bed with Stainless strips and polished bolts Brand new Boyd Coddington Wheels (20's rear, 18's front)Polished Stainless Master Cylinder Res. coverCustom Gauge Cluster Tilt Steering with polished Lacarra WheelChrome front grillQuality of Paint and Body in great shape and looks incredible.Custom Sound system with 6"screen and GPS. Alarm and auto door locks!!"