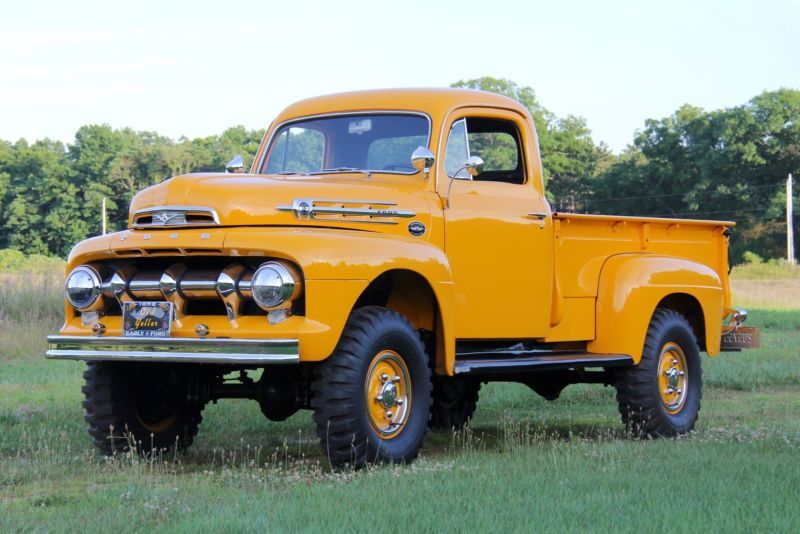 Beautifully restored 1952 Ford Marmon Harrington F2 All wheel drive 3/4 ton truck. This truck
went through a full body off nut and bolt restoration in the early 1990s by a well known 1952 Ford private
collector, parts and funding were not an issue when this truck was done and the results are obvious. I was a teen
at the time this truck was coming together and always admired its quality an detail. Then many years later I was
able to buy it out of his private collection. It's worth mentioning the
previous owner is very patriotic and wouldn't think of using foreign or any non OEM parts during its restoration so
all it's parts are USA made or NOS Ford, taken from his large inventory of NOS 52 Ford parts he was a large scale
collector. So you can be assured this isn't a restoration with a hodgepodge of foreign stuff today's market seems
to bring.
The engine is the correct era 239 V8 Flathead Ford and was rebuilt prior to the restoration and starts and runs
very nice. The only point I can deduct from the entire truck is that the engine block has a small repair near the
r/s water-pump that probably dates back to the 1950s and was obviously a good enough job that the rebuilder saw no
reason to replace it in after pressure testing in the early 90s when it was rebuilt prior to being installed in
this truck. This is not an issue it does not affect any performance or cause the engine to do anything unusual like
leak or run hot. The bed has been rebuilt using kiln treated, sanded and sealed hardwood, the trim is stainless steel and is show
caliber. The paint is one of the trucks many highlights, it is the factory color this truck was date coded with,
and is PPG Delstar Acrylic enamel, the finish is a 10 out of 10 I'm certain this paint job in today's market would
cost you over 20k to duplicate, which is one of the reasons I'm nervous to be around it. The interior is also
extremely nice and the seat has be reupholstered the spring set and even the burlap are were NOS 52 Ford, the
headliner replaced, all gages work even the dome light goes on and off with the doors being opened and shut, and
both spot lights shine bright. The odometer reads the mileage since the trucks rebuild.
To my knowledge everything on this truck works as
it should I have put a limited amount of miles on it with no problems, leaks,etc. It has been very well received
in the parades and shows I've had it in. The truck pretty much speaks for itself. This would make a wonderful
marketing tool for a large company to enjoy. I hold a clear title in hand.