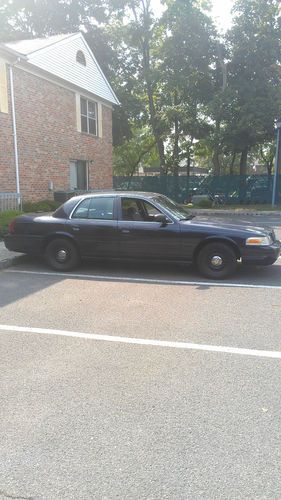 Looking at 2000 Ford Crown Victoria Police Interceptor P71, blue on blue. Has 126k miles and counting, we still use it on daily basis. Car is being sold as is and locally. There is no warranty expressed or implied. We had the vehicle since 11/10. we are second owner. Cherry Hill, NJ was 1st owner for 10 years. The car needs brake pads, and a bolt for driver seat as it rocks. Shocks creak when cold out, but once warmed up they are fine, so maybe they need replacing too. Paint is fading on hood, roof & trunk. There are scratches but nothing major and there are no dents and no accidents.Engine, trans and rear operates as they should no problems. Power windows, locks, heat & AC works. interior is good condition, no rips or scratches no damage. Driver seat is worn a little but you cant see in pics. More info, questions or test drive call/text 908-327-8588 This is a soild car with a lot of life left, serious offers will be entertained.

Do not ask me what reserve is. $500.00 deposit is due immediately after winning the auction and must be sent through paypal, the deposit is non-refundable. you can pay balance with cash on-site. If you dont have paypal then dont bid, if you have negative or 0 feedback, do not bid either your bids will be erased. Serious offers will be considered. Willing to deliver. We can talk about that later. Thanks for looking  & happy bidding.

Revise: You can text me for additional photos. I will send you pictures of what ever parts of the car you would like to see, or to schedule a test drive.