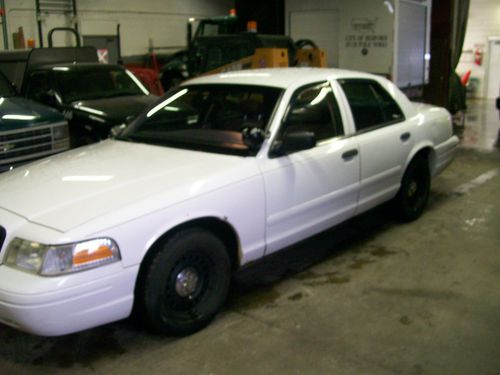 The City of Bedford, Ohio a 5 square mile city is offering for sale this 2001 FORD CROWN VICTORIA CITY OWNED with ONLY 80247 one-owner miles.

This car was the Police Departments since new but still has plenty of life left. Regular preventive maintenance was performed since new by our in house mechanics. All maintenance records will be included with this car.

Car  has some rust issues in the normal areas which I show in the pictures.. interior is in DECENT  shape Even though we are the original owners of the CAR it is being sold as-is without any warranty or guarantee what so ever. Any questions Contact our Chief Mechanic, Rick at 440-735-6586 and he will try his best to answer all your questions. High bidder responsible for pick-up or to arrange shipper.

NO ... I CAN'T SELL IT ON A BUY IT NOW This is public property and has to be sold by auction only.

NO...YOU CAN'T WIN THE AUCTION THEN TAKE IT TO YOUR MECHANIC BEFORE YOU PAY FOR IT. This vehicle was in service until last week and was replaced with a newer one. All vehicles are sold as-is but we will be as honest as possible if you would like to come out anytime between 8 and 4 Monday thru Friday or send someone to look at it or call Rick at 440-735-6586. We have all the service records from new and will include them with the sale. Our VEHICLES have been purchased by other CITIES and put back in service.

NO... I DON'T MAKE SECOND CHANCE OFFERS If you get one from me notify ebay at SPOOF@EBAY.COM

ALL VEHICLES ARE SOLD AS-