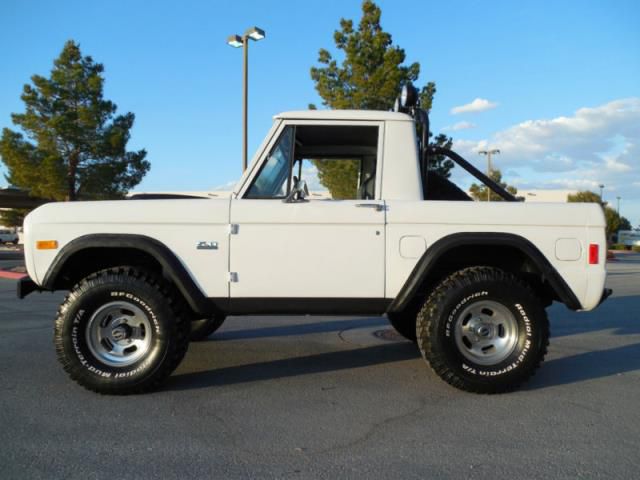 Motor run's outstanding, aluminum intake and 4 bbl carb, headers with duel exhaust and new mufflers. The Motor run's 180 deg temp and 40 lb oil pressure all day long in the hot summer heat with the A/C on. Bronco also fitted with Power Steering and Power Brakes. Drives nice and will stop on a dime! The manual transmission is factory ford Bronco that shift's and down shift's outstanding.  The 4 wheel drive transfer case is factory Bronco dana 20 and the rear end is factory ford Bronco 9 inch. Front end is dana 44 with locking hub's. New Vintage Air Conduction also installed and it blow's ice cold.  Bronco also retains it's stock factory gearing so it can been driven on the street or highway's for out of town road trip's. All the running gear under this Bronco is under 21,000 fresh.  It's a very reliable vehicle that start's first time every time and every thing work's correct . Bronco retains all it's original factory vin numbers and vin plates. One VIN tag on drivers door frame - One metal factory vin plate inside glove box door as it should be . The vin number is also stamped on the frame as it should be. No Vin issue's and Clean title to buyer when paid in full.  It's a very nice looking Bronco that run's very well. All Lights work correct! Off Road driving light's work correct - SEE VIDEO. All factory dash gauges work correct. Heater work's - Wipers work's - E brake work's - The factory "back up light's" ever work. Door's lock with the key to keep every thing safe inside. No rust in Body - No rust in floor pans. The bottom side of this Bronco is dry NO LEAK'S. Bronco has been driven on the street for the most part after restoration. All the 4 wheel drive parts also in great working order if going off road is your thing. No body damage - No rust ! It's kept clean and detailed top to bottom and look's great . The paint is a few years old kept waxed and paint touched up as needed. SEE VIDEO. This Bronco is driven and enjoyed as it should be. People will tell you nice looking Bronco. The inside is very nice seat's updated to newer high back bucket seat's with side support. The inside floor pan's also look outstanding. The cab area floor pan's have been sound deadened and a carpet kit installed. New window felt's with good door rubber's. A Pioneer Am/ Fm /Cd / I pod /Mp3 / Bluetooth Hands Free stereo installed. This is a very reliable Bronco.