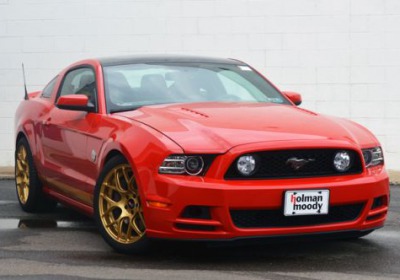 If you're a fan of Ford racing history, a Mustang worshiper or even just an avid follower of our yearly SEMA coverage, you may have heard the back story on the Race Red Mustang you see above. Back in 1964, Holman & Moody was tapped by the English Alan Mann Racing Team to race-prep three Mustangs for competition in the incredibly arduous 4,000-mile Tour de France Automobile rally. Competing mainly against Jaguar MkII saloons over 10 days and 17 stages, the H&M Mustangs took the top two places in the Touring class and the first-ever racing win for Ford's pony car.

Though the history of that first Mustang win hasn't been incredibly well known here in the States, the subsequent decades have seen plenty of racy versions of the car come and go. Last year at the SEMA show, we covered the brief debut of this living tribute to that piece of racing lore, the Holman & Moody 50th Anniversary TdF Mustang.

This limited-edition Mustang represents a kind of new venture for H&M, as the legendary racing shop has spent the last few decades earning its keep largely by restoring vintage racing cars. The urge to get back into the world of Ford and Mustang was powerful, however, what with the car's 50th anniversary looming and the current generation of 'Stang just about out the door.

We were excited to learn that TdF number 003 out of just 500 in total to be produced – and the very first customer car, to boot – was going to be in southeast Michigan just long enough for us to snake a quick test drive in it. We found the boldly painted and wheeled Holman & Moody nestled amongst a Boss 302 and some Mustang GTs at Jack Demmer Ford in Wayne, MI, and braved a slightly rainy afternoon to get our licks in.

Driving Notes I'd be remiss if I didn't give a quick shout-out to Mr. George Bidlespacher of Trout Run, PA, who is the proud (and brave) owner of the car that I snapped up for this test drive. It's not often that a private citizen lends out his or her own car for wacko journalists to drive and report on, and I'd say George's doing so is a pretty strong testament to the feelings he has about this 50th Anniversary Tour de France Mustang. You've got a hell of a nice machine, sir – please continue to enjoy scaring the pants off your neighbors with it.