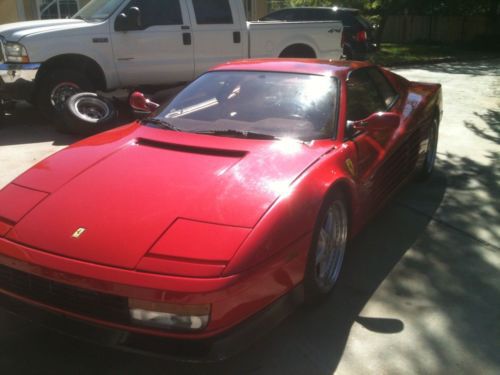 As expected, Ferrari has today officially pulled the covers off the latest version of its front-engined California grand tourer ahead of the car's impending live debut at the Geneva Motor Show. The headline news, again as expected, is a new 3.9-liter turbocharged V8 engine. Ferrari promises zero turbo lag from its innovative new engine, which is rated at 560 horsepower and 557 pound-feet of torque.
That's 70 more horses than the last California, which, coupled with its 49-percent increase in torque, allows the new California T to accelerate from 0-62 miles per hour in 3.6 seconds. Fuel mileage is improved by 15 percent, and emissions are down 20 percent. Also, for what it's worth, Ferrari promises "the most exhilarating soundtrack any turbo has ever yielded." Sounds pretty good to us...
There's plenty more of interest besides the new turbocharged engine, such as the retractable hardtop that turns the four-seater into a convertible in 14 seconds, improved steering response, reduced roll and pitch when cornering and carbon-ceramic brakes.

The so-called "silly season" in Formula One conjured up all kinds of rumors, and most of them revolved around Kimi Raikkonen. Would the 2007 World Champion stay at Lotus? Would he switch to Red Bull to replace Mark Webber? Would he return to Ferrari?
Well now we have the answer. Ferrari has confirmed that the Finn is heading back to Maranello, where he will partner with Fernando Alonso starting next season in a two-year deal. That means Felipe Massa, who has been at Ferrari since 2006 but has struggled to keep up the pace since his catastrophic crash in 2009, will need to find a new seat.
The announcement opens up a series of questions as a game of musical chairs commences. Where will Massa go? Who will fill Raikkonen's seat at Lotus? And will Alonso tolerate the team bringing in another former champion and serious contender to challenge his position as number one at the top team? We'll just have to wait and see, but the move in and of itself demonstrates a certain businesslike lack of personal emotion on Kimi's part, having been unceremoniously dumped by Ferrari three years ago to make way for Alonso. Head on down below for the rather Raikkonenly brief announcement.

Are you the Enzo-succeeding Ferrari F150?

We've brought you no end of spy shots and rumors surrounding the new Ferrari hypercar, often referred to as F150, that is destined to succeed the Enzo as the Italian maker's top offering. Now, one new and highly speculative rendering has come to light whose origins are interesting, even if the final product is still pretty much a stab in the dark.
The rendering you see here was created by an organization called goldRush Rally, which published the image on its Facebook page. The claim is that this rendering was based on a "snapshot of a plaque with a sketch of the new supercar." We certainly won't speculate as to what kind of "presentation" a luxury-rally throwing company like gRR would be invited to - to say nothing of why there was a plaque bearing the image of a supercar that has been so well cordoned off from public eyes - but we'll roll with it because we love the internet.
Even if the story is completely true (big if), we're fairly certain the details of the rendering miss in some places relative to the real deal car. The front wheel wells, for instance, seem comically thin around the top, and hold wheels that are way out of proportion with the spy shots and videos we've seen so far. More promising, however, is the detailing of the door and sill of the F150 - portions of the car that have consistently been covered in spy shots.