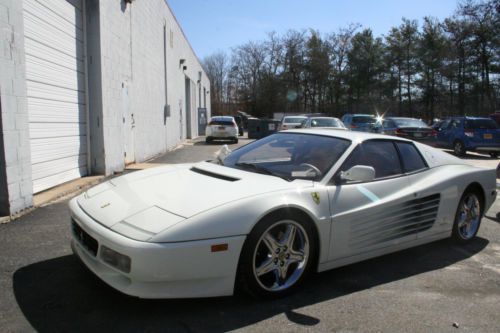 All manner of vehicles change hands at the annual auction extravaganza in Arizona, but never has one sold for as much as the Ferrari you see here. The car in question is an (obviously) eminently desirable 1958 Ferrari 250 GT LWB California Spider, one of only 50 ever made and purring onto the stage in flawless red over black livery with matching numbers of the coveted covered headlights straight from the factory.
When we reported on the car's consignment in anticipation of this weekend's sale, it was expected to bring in between $7 and 9 million - and it's done just that, coming in near the top of its valuation with a winning bid of $8.8 million. That makes for a lot of zeros, but while it set a new record for the Arizona auctions, it hardly makes it the most expensive in the world. That honor still belongs to the Mercedes-Benz W196 that sold last summer for nearly $30 million. Nor is it the most expensive Ferrari ever sold at auction, an honor which still belongs to the 250 Testa Rossa that sold for over $16 million in 2011. Heck, it's not even the most expensive 250 California ever sold, coming in behind the SWB example that sold for nearly $11 million in 2008. All of which only goes to show just how insane the collector classic car market has grown in recent years.
The California was undeniably the highlight of RM's two-day sale, but was joined by several other seven-dollar lots, including a 1961 Porsche 718 ($2.75 million), a Ferrari 250 GT Lusso ($2.44 million), a Duesenberg Model J convertible ($2.2 million) and several other million-dollar Ferraris, Mercedes and a '35 Hispano-Suiza. A 1961 Chaparral 1 failed to reach its reserve price despite a high bid of $1.75 million, neither did a 1966 Porsche 906 Carrera 6 at $1.18 million or a Ferrari 275 GTB/4 at $2.85 million. RM Auctions did, however, manage to sell 85 percent of those lots consigned to bring in a massive two-day total of $45.56 million in sales, details of which you can read in the press release below.

After its first ever race at the Rolex 24 at Daytona, we can already tell that there should be plenty of excitement in the newly formed United SportsCar Racing series. Of the four competing classes, three of the winners came down to close last-lap performances, but perhaps none were as close - or controversial - as the GT Daytona (GTD) winner. Spoiler alert.
Midway through the infield portion of the Daytona International Speedway, the Level 5 Motorsports No. 555 Ferrari 458 Italia was trying to hold onto its first-place position over the Flying Lizard Motorsports No. 45 Audi R8. The R8 took an aggressive line trying to pass the Ferrari, and it ended up running out of track and driving off the course momentarily. International Motor Sports Association (IMSA) officials originally thought there was avoidable contact on the Ferrari's part and penalized the team accordingly, which meant Flying Lizard was the class winner. After watching the video replay, though, it was clear that there was no contact between the two cars. Officials overturned the ruling, rightfully giving the Level 5 Motorsports team the Rolex win.
A brief statement from IMSA is posted below regarding the matter, and we've also included a full video recap of the race from FOX Sports where you can see this GTD incident starting at the 2:30 mark.